The Latimer Masterplan And The Stock Options Review

Posted on July 13, 2012 by grenfellactiongroup

By the time the Lancaster West Community had woken up to the danger posed to our community by the Kensington Academy and Leisure Centre project it was already too late to stop the juggernaut. The site allocation had been rubber-stamped before we even realised it was being discussed.

The key to understanding how this came about is in the consultation process itself, and how it was manipulated to exclude our community, until it was too late for our objections to have any meaningful effect.

Throughout the time that the boroughwide Core Strategy consultation was ongoing the Council was also conducting another consultation exercise that was confined to the Latimer area. This was a ‘Stock Options Review’ which had been prompted by anticipated cuts to the government subsidy payable into the Housing Revenue Account, which funds all social housing provision.

The Council was exploring ways to increase revenues from its housing estates to meet the anticipated shortfall, and one of the options being considered was large-scale regeneration of the Latimer Area, also known as The Notting Barns South Area.

Unlike the Core Strategy consultation, which was conducted on a highly selective and exclusive basis, the Stock Options Review was widely publicised on council housing estates in the Latimer area, notably the Lancaster West and Silchester estates, and most households were routinely and repeatedly bombarded with mailshots.

Furthermore, the ‘Stock Options’ documentation that local residents were receiving withheld information about the site allocation for the Academy, and gave false assurances that any new development in the area would be confined to the ‘Silchester Garages’ site.

In fact the development plans for the Silchester garages site were quietly expanded into a full redevelopment of the entire Silchester Estate. It should be noted that the ‘Core Strategy’ consultation was nearing completion at this time and the proposed site allocation for the academy was well known to Council officers involved in the ‘Stock Options Review’.

In a letter to residents in December 2009, the Chief Housing Officer, Laura Johnson wrote::

“The Council is examining options to establish a new Academy with up to six forms of entry (equivalent to 900 11-16 places) and up to 250 post-16 places in North Kensington. We are committed to increasing pupil places in the north of the Borough to meet local demand, provide greater choice, diversity and fair access for local parents and the local community.”

It is noteworthy that this letter specifies only a North Kensington location for the proposed school. Lancaster West is not specified, even though plans to locate the new academy on the Lancaster Green site were well known and advanced in RBKC circles. 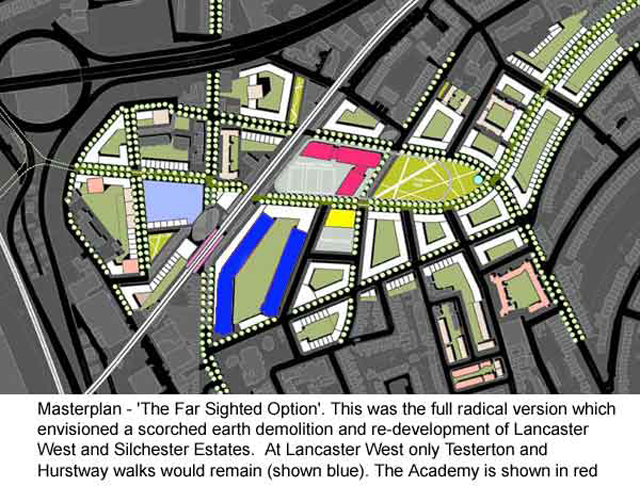 Both the ‘Core Strategy’ and the ‘Stock Options Review’ were informed by a detailed masterplanning study of the Latimer area commissioned by the Council early in 2009. This was ‘The Latimer Masterplan’,  also known as ‘The Notting Barns South Masterplan’.

This study proposed a radical regeneration of the entire area involving demolition of virtually all the council owned housing. However this report was withheld from the ‘Stock Options’ consultees, and they were shown only a much edited extract from which all the ‘scorched earth’ detail of the radical regeneration scenario had been removed. This appears to have been a cynical attempt to manipulate the ‘Stock Options’ consultation by witholding information about the more controversial aspects of the regeneration that was being considered.

The site allocation for the Academy, which ultimately appeared in the ‘Core Strategy’, was a key element of the Masterplan. The Council was eventually forced, in June 2010, to publish the full Masterplan under ‘Freedom of Information’ legislation.

When confronted at that time with the detail of the Masterplan study the Head of Planning insisted that it was just ‘blue sky thinking’ and there was never any intention to implement the radical proposals it contained. We believe that the truth is that they had every intention of bulldozing this whole area, and all that stopped them was the collapse of the world economy, the banking sector crisis, and of course the collapse of the housing market.

The redevelopment  of the Silchester Estate is still going ahead, as is the KALC project, both of which were key elements of the Masterplan.  When and if the housing market eventually recovers we fully expect them to revert to type and come after Lancaster West and the remaining smaller social housing estates scattered throughout this wider area.

KALC may be just the start of a much bigger fight.

PLEASE NOTE – This is part of a longer critique of the flawed Core Strategy consultation, as it relates to Lancaster West Estate and the Kensington Academy and Leisure Centre project.

If you wish you can read this in its entirety via this link: