Posted on July 26, 2012 by grenfellactiongroup 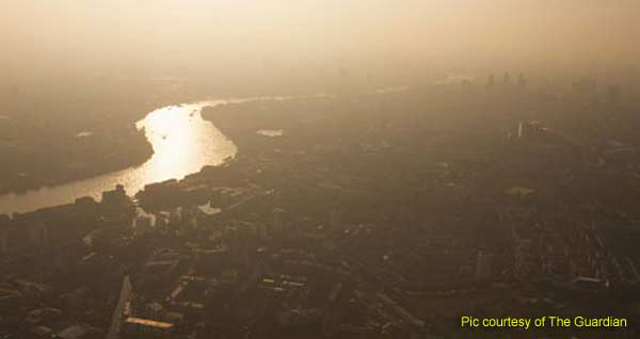 Regular readers of this blog will have noted our recent report (Reprovision Of Outdoor Sports Facilities)  highlighting potential air pollution risks at the Westway Sports Centre, which will be required to plug gaps in outdoor sports provision resulting from the loss of facilities following the KALC development at Lancaster West.  How strange that the creation of a new sports centre and school at this location should result in a net loss of outdoor sports provision.

It seems our warnings may have been timely, as witnessed by recent reports from Clean Air In London,  also featured in The Guardian newspaper (25th and 26th July) of dangerously high smog levels affecting North Kensington. One might reasonably assume that the high ozone levels are caused in part by traffic using the Westway flyover, beneath which the Westway Sports Centre sits.

High temperatures and easterly winds that are forecast to persist until Friday look likely to create a “perfect storm” of smog pollution that could affect the performance of athletes at the start of the Olympics.

Health experts have warned that summer smog could cause problems such as the inflammation of airways and breathing problems for London 2012 competitors, especially those in endurance events.

The Department for the Environment, Food and Rural Affairs (Defra) issued a pollution episode warning at 1650GMT on 25 July, after ozone levels in North Kensington, London, breached the “ozone public information threshold” set by law.

The department warned pollution levels would be high for 24 hours as the warm sunny weather is likely to continue. Defra said: “The main pollutant of concern is ground level ozone as a result of the warm and sunny weather which favour the formation of secondary ozone in the atmosphere.”

Clean Air in London said this was the first serious warning since new laws on informing the public of high pollution levels came into effect in 2008, and said the UK’s worst summer smogs in recent memory occurred in August 2003 and June-July 2006.

“Athletes are thought to be especially vulnerable to the effects of ground level ozone and other air pollutants because they are breathing in very high volumes of air,” said Gary Fuller, an air quality expert at King’s College London. “It’s something that might affect their performance on the day.”

“The government and the mayor could have avoided the embarrassment of issuing this warning just ahead of the Olympics if they had taken firm action years ago. Instead we have had a series of delays and backward steps which have done little to improve the health of Londoners. There is now an additional concern that certain events could be affected if the pollution levels become even higher.”

Despite the well established and well documented risk of air pollution in the North Kensington/Westway area, air quality is still not measured at the Westway Sports Centre. Meanwhile RBKC are forging ahead with their plans for the Kensington Academy and Leisure Centre site, which will involve a significant loss of outdoor sports facilities at that site, and the displacement of many current users, including school parties from the wider Kensington area, to the Westway Sports Centre.