Posted on October 19, 2012 by grenfellactiongroup 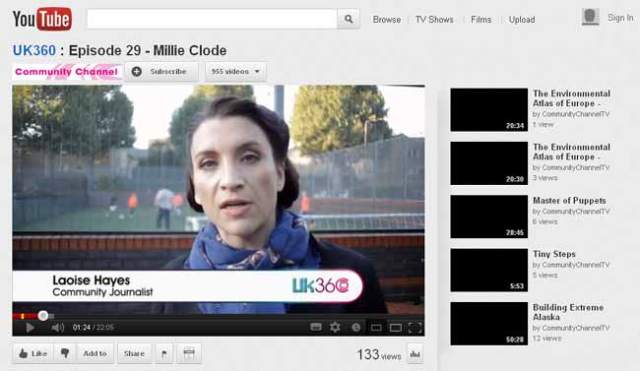 We thought our readers might like to check out an excellent news segment about the doomed Lancaster Green that appeared earlier this week as the lead story on the Community Channel’s UK360 programme. The piece was researched and presented by television journalist Laoise Hayes, who did a first class job, in our opinion. Along with some lovely shots of Lancaster Green, and some less than lovely shots of the replacement MUGA at Westway Sports Centre, the segment included interviews with a number of people, including our own roving reporter Eddie Daffarn and Councillors Judith Blakeman and Nick Paget-Brown. If you missed it on the Community Channel you might like to watch it now via this link;

One of the odd things about this report is the way it points up, yet again, the peculiar position taken by local Labour councillors throughout this sad affair. In her interview Councillor Blakeman is severely critical of the impact the KALC development will have on local children, whose beautiful play-space (Lancaster Green) will be bulldozed into oblivion. It will be replaced by a greatly reduced area of manicured lawn which might serve the needs of the Academy and Leisure Centre, but will certainly not serve the needs of our children. Blakeman even goes so far as to threaten to appeal to the Secretary of State to call–in the KALC planning decision for independent scrutiny. We’ll have to wait and see if she makes good on that threat (readers will be interested to know that we are currently working on our own appeals to the Secretary of State and the Mayor of London – more on that later).

Meanwhile, you might like to compare Blakeman’s fightin’ talk with the content of some of her recent emails, one to the Grenfell Action Group, and another addressed to residents generally, following the approval of the planning application.

The two Labour members of the Committee voted against the decision solely because the inclusion of the Phase Three market housing will seriously reduce the amount of open space, over-develop the site and lose the car parking spaces and small formal garden outside the current Leisure Centre. We welcome the development of the school, for which we have been campaigning throughout the last 15 years.”

No mention in the emails of that tiny irreplaceable wilderness that doubles as our children’s play-space, the beautiful and much loved Lancaster Green, which will be completely destroyed. No mention either of the popular and much used MUGA’s lost to the Westway Sports Centre, in the poisoned shadow of the motorway.

Incidentally, there were some great shots in Laoise’s report of the constant flow of motorway traffic on the sliproads and ramps surrounding the replacement MUGA. Even without her commentary these shots would bear eloquent testimony to the crime committed against the sporting youth of Lancaster West, and North Kensington generally, by concentrating so much of the area’s outdoor sports provision in this polluted stygian blackspot.

Labour councillors appear to have recently renewed their efforts to raise the profile of Westway pollution, and of the polluted Westway Sports Centre, with the ruling Tories on the Council (thanks to some less than gentle prodding from us). They deserve some credit for that, but they deserve none whatever for the shameful manner in which they have betrayed and sold out the Lancaster West community on the KALC issue.

Councillor Blakeman didn’t much like it when we called her two-faced before, but Lancaster West residents might be well advised to think hard before voting for this lot next time they’re called upon to do so – not that they’ll have any real alternative.

Oh the joy of the two party state!

Great to have a choice, innit?