Posted on August 19, 2014 by grenfellactiongroup 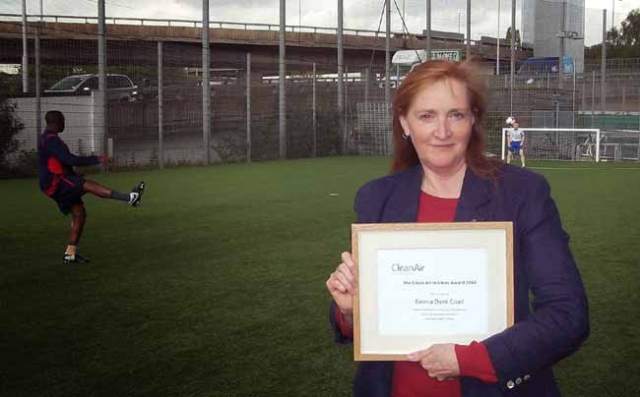 Until recently it was our intention to congratulate Councillor Dent Coad, the new Leader of the RBKC Group, on her recent receipt of the Clean Air for London Award 2014. We were given pause for thought, however, on seeing how self-congratulatory was her own recent blog on the subject (no false modesty there Emma).           Dent Coad Blog

We also found it more than a little ironic that she chose to receive the award on a football pitch at the Westway Sports Centre, and without so much as a nod of acknowledgement to the efforts of the Grenfell Action Group, which has campaigned vigorously for the past three years on the dangers to public health of relocating the five a side pitches from Lancaster Green to this same site – under  the slip roads of the highly polluted Westway.

On her blog Councillor Dent Coad quotes Simon Birkett, Founder and Director of Clean Air in London, who said:

“Kensington and Chelsea joins Westminster as the two most-polluted boroughs in the UK.  I witnessed the human side of this crisis when Emma showed me sports fields under some of London’s busiest elevated roads and described many other local policy failures.  Hearty congratulations therefore to Emma on winning the Clean Air in Cities Award after leading, over many years, calls for action to tackle air pollution.”

“We urgently need a fresh approach from the Council that puts air pollution at the top of the policy and political agendas in planning, road transport and public health.  Vote for Clean Air on 22 May.”

Maybe her failure to mention the Grenfell Action Group’s ongoing role in this controversy is not the sole fault of Councillor Dent Coad, who is normally more switched on and well mannered. She is possibly under strict orders from the new Labour Group Whip, the recently demoted Councillor Blakeman, to avoid any mention of the ex-Labour leader’s nemesis in any favourable light.

Anyway, as anyone who is a regular reader of this blog will know, the Westway Sports Centre has been a regular focus of our attempts to highlight  the poor air quality in the vicinity of the Westway generally, and the Sports Centre in particular, and we have spent many hours, and written many emails, lobbying our local MP, Sir Malcolm Rifkind, Sport England, Councillor Blakeman and her poodles in the RBKC Labour Group, Councillor Professor Coates and other members of the Ruling Party at Hornton St, numerous RBKC Officers, local Press, etc highlighting this subject.

So, when Councillor Dent Coad decided to parachute into the controversy surrounding air quality in North Kensington she appears to have ignored the fact that, despite the award presented to her, the RBKC Labour Group seems to have done precious little to safeguard the health of the users of the Westway sports pitches. When we wrote to her seeking her support a couple of years ago she replied that:

“….despite the very clear commitment to pollution monitoring made at the KALC planning meeting, we are now told there is no legal obligation to do this. I was sitting on the committee and supported Cllr Prof Coates in his insistence this should be done…We have not forgotten and are still considering how to persuade the Council to honour its commitments. We will not give up.“

We have a major problem with the false promise in this statement, and with the 2014 Clean Air Award that was recently bestowed upon her. Our cynicism arises from our own recent enquiries into the activities of RBKC Labour councillors on this issue.

We wrote to  RBKC in July and requested, under Freedom of Information legislation, to see copies of:

“.. any correspondence, emails, minutes of meetings, etc concerning RBKC Labour Councillors and the issue of air pollution around the Westway Sports Centre that may have taken place since 11th December 2012.”

We particularly stressed our desire to see any communication with senior officers in the  RBKC Environment Dept requesting action to be taken over the siting of the Lancaster West football pitches at the Westway location.

The reply we received from Robin Yu at RBKC was concise and unequivocal. He said:

“The records have been searched…and no information is held in relation to your request.”

If this is so, and we have no reason to doubt Mr Yu’s statement on this, then we are left wondering exactly what Emma Dent Coad did to merit her receipt of the 2014 Clean Air Award.

We also feel very strongly that  the entire Labour Group has got some serious explaining to do to the communities of North Kensington whose sporting youth continue to be poisoned by pollution from the Westway .

Perhaps Mr Birkett, at Clean Air in London, ought to explain his part also.  Was this award really about improving our air quality, or was it just politics as usual, designed to inflate the egos and reputations of the Great and the Good, of whatever party?