Posted on October 19, 2014 by grenfellactiongroup 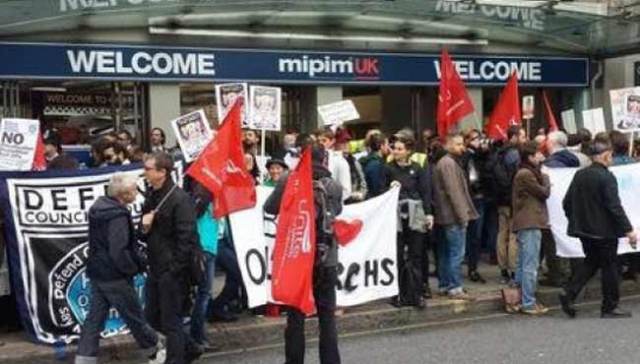 Members of the Grenfell Action Group were involved last Wednesday as dramatic scenes unfolded at the world’s largest property fair in Kensington Olympia. Protesters chanting ‘Block Boris’ and waving banners that read ‘Homes For People, Not Profit’ blockaded the building. You can read more about this, and watch a short You Tube video shot at one of the most dramtic moments of the day via the following link to the ‘London 24’ news site:

We hope to return shortly to the local Lancaster West issues that are our usual stock in trade, but we strongly believe that our local issues are part of a growing and much wider struggle, London-wide, UK-wide, Europe-wide, and probably worldwide.

We are proud now to be involved with the Radical Housing Network in London.(http://radicalhousingnetwork.org/)  We regret that when we first ‘took up arms’, on behalf of Lancaster West residents, struggling in vain to block the Kensington Academy project, at that time we had to fight alone. This is no longer the case, and we urge all our readers to become active in this growing movement against the destruction of our communities by the unprincipled thugs and profiteers under whose governance we are condemned to live and to struggle.

A very well known Lancaster West resident (who shall remain nameless) once uttered the following words to us:

“IT IS BETTER TO DIE ON YOUR FEET THAN TO LIVE ON YOUR KNEES.”

WE HAVE NEVER FORGOTTEN THESE WORDS. THEY CONTINUE TO INSPIRE US AND ARE ABOUT AS CLOSE AS WE CAN GET TO ARTICULATING A SUITABLE MOTTO FOR THE GRENFELL ACTION GROUP.

AS FAR AS WE ARE CONCERNED THERE WILL BE NO SURRENDER!

This entry was posted in Uncategorized and tagged Grenfell Action Group, Lancaster West, Radical Housing Network. Bookmark the permalink.
%d bloggers like this: