Urgent “call out” from Focus E15

Posted on January 18, 2015 by grenfellactiongroup 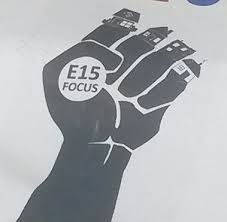 The venue for the action is Bridge House  which is just 5 minutes walk from Stratford’s main station and can be readily accessed from Notting Hill on the Central Line.

Urgent call out for Monday 19 January at 9am

Please see below the press release regarding a homeless single mother and three children resisting social cleansing from Newham.

This brave woman stood up to Newham council trying to send her out of London and was forced to sleep in a police station with her three children, aged 6 years and under.

We stand with her and say SOCIAL HOUSING NOT SOCIAL CLEANSING

On Friday morning, Zineb, a single mother of three who works part-time for Newham Council was evicted by a private landlord, leaving the family with nowhere to go.

Zineb went to Newham Council’s Bridge House at 11am to declare the family homeless at which point she was offered temporary accommodation two hours outside of London. Upon rejecting the offer because of what it would mean for her job and her eldest daughter’s school, she was deemed to have made herself intentionally homeless.

She refused to leave Bridge House and council workers called the police, who took her to Forest Gate police station where the family had no choice but to stay overnight, in the lobby, sleeping on the floor. The next day she came to the Focus E15 campaign stall and asked for help. We immediately put a message out to our networks and were able to find emergency accommodation in Newham for the weekend.

On Monday 19 January people from Focus E15 campaign will be accompanying Zineb and her children to Bridge House and expect Newham Council to find accommodation for this mother and Newham employee in reasonable reach of work and school.

The message is clear – NO TO SOCIAL CLEANSING

This entry was posted in Uncategorized and tagged Focus E15, Newham council, Radical Housing Network. Bookmark the permalink.
%d bloggers like this: