Posted on February 24, 2015 by grenfellactiongroup 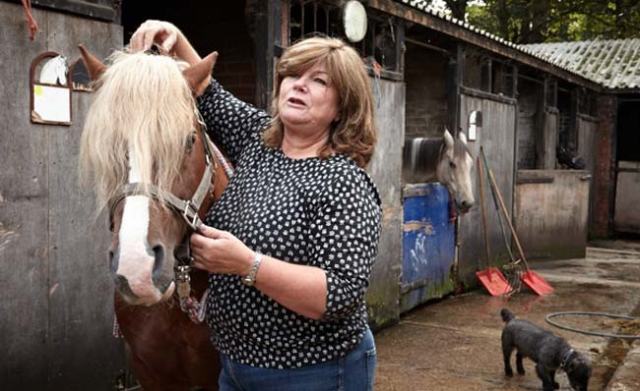 In the shadow of the Westway flyover, there is a small enclave of stables which Sarah Tuvey has run for the past twenty years, offering riding to community groups from the surrounding areas and single-handedly keeping the age-old culture of horsemanship alive in this corner of London. She is evangelical about the social benefits of the stables, especially for children who have grown up in the city and may not have seen horses before. However she has now been told her lease will not be renewed by the Westway Trust in February.

If politicians can justify the vast shopping complexes and titanic motorways suspended in the air above us, why cannot this small but well-used stables be allowed to exist for the benefit of its immediate urban community? You might like to visit the West London Stables for yourself to experience horse-riding in this unique location before it is too late.

In the meantime we might all do well to reflect yet again on the mean spirited, self-serving and mercenary mindset, attitudes and actions of those who rule this borough (including the Westway Trust, a so-called local charity), supposedly on behalf of it’s residents, and whom we so often have rightly referred to as the Hornton Street Tory neo-cons. We note also with disdain the utter hypocrisy of RBKC continually supporting the loss-making Holland Park Opera while simultaneously using the jackboot to crush the Westway Stables.

Sarah Turvey and Westway Trust have since issued a joint statement revealing that the Stables have been offerd a temporary reprieve until July, on condition that they produce a business plan that satisfies the Westway Trust consider. However, given the substantial cuts to the subsidies the Stables depend on it is hard to see how they can produce such a business plan – unless some PHILANTROPIC  BENEFACTOR  should see fit to rescue this noble cause by providing additional financial support. Indeed there is no indication in the statement of a change of ‘heart’ on behalf of the Westway Trust, who appeer rather to be entirely ‘heartless’ and driven solely by their own mercenary ambitions to redevelop the lands under their control, which were gifted to them by RBKC, who hold permanent seats, and one assumes wield considerable influence, on the Westway Trust Board.

Still it must have taken a lot of guts to confront a situation where a final decision appeared to have already been made, and one has to wonder if helpful publicity from a ‘notorious’ local blog (ie the Hornet), leading to national press coverage by the Evening Standard, and other social media, may not have given the ruthless Westway apparatchiks pause for thought. Otherwise it might all be over by now. It seems that Ms Turvey and her staff desperately need immediate support and rescue. We can only hope that such support is forthcoming before time runs out on the Westway Stable project.

Meanwhile we would consider it an honour, a duty and an obligation to resist the eviction of those who have so generously contributed their time and loving energy to this wonderful community resource, and we call on all who care about the Westway Stables, local or otherwise, to join us in that resistance, particularly if and when the day finally arrives when the bailiffs descend to do their dirty work. We will post that date and time when and if it becomes known to us.

PS: We strongly recommend having a look at the blog below (lots of lovely pictures) which beautifully details the history and cultural value of the Stables, and from which some of our text was borrowed: