WHO YOU GONNA CALL? – RYDONBUSTERS!

Posted on March 19, 2015 by grenfellactiongroup 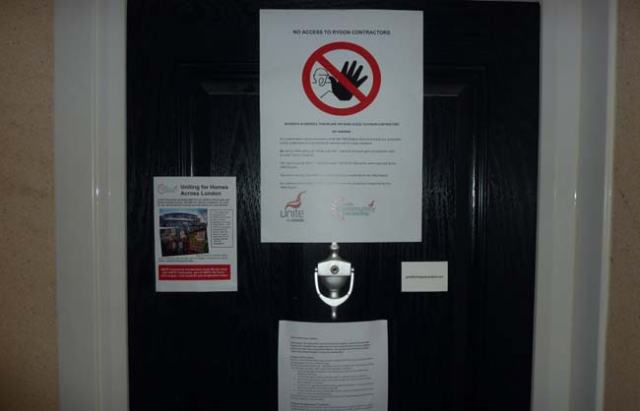 Over the weekend Grenfell Tower residents will be door-knocked and provided with posters, letters, etc to display on their front doors informing Rydon that their workmen are not welcome in our homes. The below text details what happened at the Emergency Residents Meeting and the action our community has decided to take:

Last Tuesday 17th March 2015, nearly one hundred residents, representing over fifty households in Grenfell Tower, gathered in the Community Rooms to discuss problems with the Grenfell Tower Improvement Works. The meeting was facilitated by Pilgrim Tucker from Unite the Union’s Community membership.

Problems with the works:
Residents discussed how RBKC Council and our landlord the TMO have prevented residents coming together to form a collective voice.
We discussed what problems the TMO/Rydon and the Grenfell Tower Improvement Works were causing to residents. Many issues were identified, including:
• Lack of meaningful consultation from TMO/Rydon and how information keeps changing all the time,
• Concern that Rydon intend to position boilers in residents entrance hallways,
• Concern that exposed hot pipes will provide a health and safety problem and will look unsightly in our homes,
• Concern at the appalling standard of work undertaken by Rydon in communal areas and inside a number of residents properties,
• Concern that the workmen commandeer the lift, create unacceptable levels of noise and do not clean up after themselves.
(A full list of concerns will be circulated via the minutes of Tuesday’s Meeting and will shortly be put on display in Grenfell Tower and made available via this blog)

Action we are taking about the problems:
Residents agreed that we want the works to be carried out in a professional manner and to a high standard, that we should be treated with respect by the TMO, and that tenants and leaseholders must be properly consulted.

Residents voted by an overwhelming majority that we will not allow Rydon into our homes until we have had the problems with the works addressed by the TMO and Rydon.

We have agreed to display posters on our front doors in an act of solidarity and to notify Rydon that they are not welcome in our properties until we are satisfied we will be treated with respect.

Residents may wish to consider strengthening our solidarity by joining Unite Community so we can form an organisation that gives us collective voice and strength.

A number of residents have volunteered to give some time to help out with organising a further Emergency Residents Meeting with Rydon so that the problems can be addressed.

We will be knocking on doors over the next few days to talk about what we will be doing next. Thanks to all residents who attended Tuesday’s Meeting and for returning some power back to tenants, leaseholders and renters.