Posted on April 17, 2015 by grenfellactiongroup

On Wedenesday 15th April members of the Grenfell Action Group joined Westway23 and parents from Maxilla Children’s Centre at the Town Hall in Hornton St to support the handing over of a petition signed by over 1900 people asking RBKC to reconsider their decision to close our community nursery. Needless to say, the neo-con monsters from the Ruling Party took no notice of the petition and decided to press on with Maxilla’s senseless destruction. The gentrification and social cleansing of North Kensington continues unabated!

The evening can best be summed up by a number of impartial comments left on the excellent Hornets Nest website.

A high-spirited crowd of N. Kensington residents attended the town hall this evening to hear the council debate the petition against closing the Maxilla nursery. Banners were waved and drums played, to the consternation of town hall staff. Inside the council chamber Labour presented the petition and spoke strongly against closure. Bored Tories ignored the residents’ reserve of £280 million pounds, to claim the need to economise. The audience clapped and heckled splendidly throughout. On cue Tories dutifully rejected the petition and the public left to plot the next round in the battle.

A banner bearing the legend “The Council despises poor people” was elegantly draped over the mayor’s Bentley. A wonderful sight, but it scared the wits out of Councillor Ahern, who ran back inside the building.

The Town Hall security detail immediately sprang into action to protect delicate Tory ears from a superb demonstration of drumming that was undoubtedly the best music heard inside the building for years.

The security men stood throughout the meeting keeping a close eye on a dangerous group of protesters who had brought a petition against the closure of a nursery school to their own Town Hall. This in a borough with £280 million of residents’ funds sitting in reserves. The security guards were doubtless on double overtime at public expense. 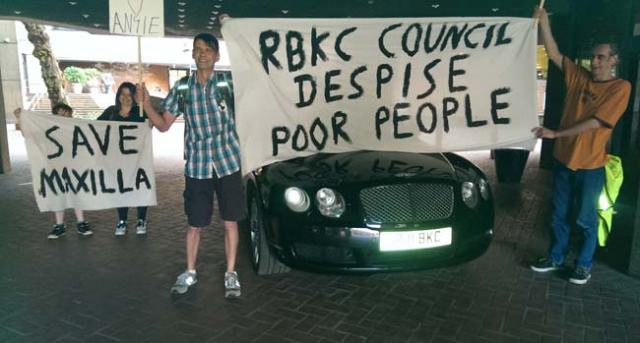 It was a glorious moment. The quality of the heckling was magnificent. The Tories all looked as if they’d rather be anywhere but in the council chamber – as well they might! This is a nursery for the tiny children of some of the poorest people in London. RBKC intends to shut it; leaving mothers with a couple of other kids in tow, having to get them to and from their own schools, traipsing at least 1km twice a day in all weathers from the far side of Ladbroke Grove to an overcrowded alternative site site in Bevigton Road, simply to receive a service they’ve enjoyed on their doorstep for years. All other children’s services will be scattered across the borough – as far away as possible from the poor. For them it’s not a cab, but waiting in the rain for public transport. Maxilla could be rebuilt, but the Council refuses. This, on the lie of needing to economise, when RBKC SITS ON MORE THAN A QUARTER OF A BILLION POUNDS OF OUR MONEY!

Everyone knows this is part of the plan to force the poor out of N. Kensington. It’s the Westway, the stables, life itself! It’s truly sickening. And the Tories are just waking up to the fact that residents of all social backgrounds know exactly what’s going on. In the polling booth, residents will do well to remember Maxilla.

We will be returning to the Town Hall in the near future…We will defend the Westway Stables and we will fight for the return of Maxilla. There will be more of us and we will make our voice heard until we get what we want. Be warned that RBCK’s ritual abuse of North Kensington is about to be derailed!