Posted on July 31, 2015 by grenfellactiongroup 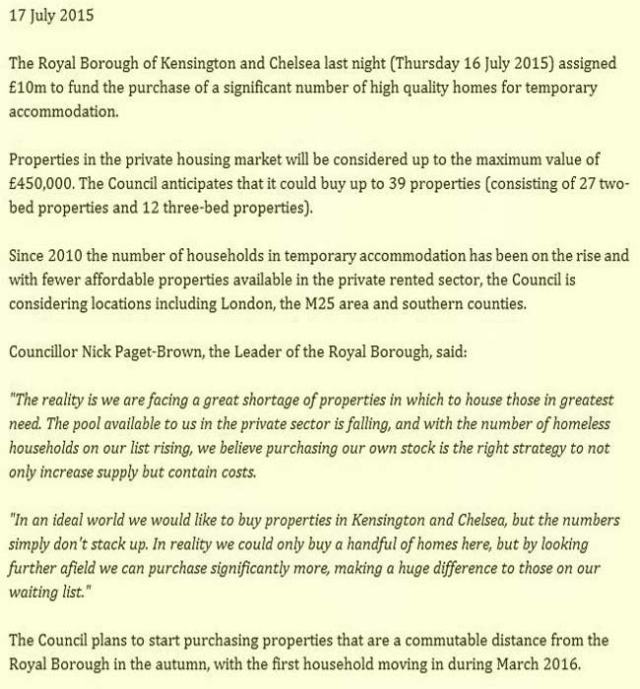 The Grenfell Action Group has repeatedly accused the Royal Borough of Kensington & Chelsea of despising the unemployed and the low-paid as an underclass which it would rather see removed completely from the Rotten Borough. The above press statement from Kensington and Chelsea Council may well be the first concrete evidence that our accusations have been well founded, and it confirms that ‘social cleansing’ is now an active policy which will soon be implemented by the Neo-Con Monsters in Hornton Street.

Back in early 2013 the Hornet”s Nest website revealed that Derek Myers (RBKC Chief Executive at the time) and Laura Johnson (Director of Housing) had been meeting with senior Councillors and Officers from Peterborough Borough Council to explore the possibility of RBKC shipping homeless families from the RBKC waiting list out to Peterborough.

This shameful plan involved RBKC buying land to build ‘barracks for the poor’ in Peterborough to which RBKC could move anyone on their housing register to a ‘Cockell New Town’ in Cambridgeshire.

At the time, these discussions apparently failed, partly due, no doubt, to the storm of adverse publicity created when the Hornet, and the Peterborough local press, both blew the whistle on it. However it has now become clear that RBKC have since continued to actively pursue this approach to solving the local social housing ‘problem’, and have now implemented the first stage of what is effectively a ‘social cleansing’ policy. This brings the nightmare scenario of largescale ‘social cleansing’ a step closer to reality.

The latest RBKC plan to use Council funds to purchase property outside London is evidence that ‘social cleansing’ is an active policy of RBKC and that our Councillors have a will to displace the poor and vulnerable out of the Rotten Borough to make way for spiv property developers and ‘buy to leave’ speculators. The references in the press release to ‘temporary accomodation’ are, of course, effectively meaningless as the Council has no intention of ever increasing the stock of social rented housing.

So far they have only allocated £10 million for this nefarious scheme, which appears to be targetted at homeless families on the housing waiting list. We all know, and the Council admits, that such a meagre budget will buy only a very limited number of properties, so we must assume that this is just a pilot scheme which is likely to be expanded if it proves successful from the perspective of the councillors and council officers responsible. We should also be mindful that what they now represent as an opportunity to house those in greatest need, may well be expanded to later include those targetted for decanting to make way for the mass regeneration projects that we now know are in the pipeline.

We have already seen social cleansing in operation elsewhere in London, notably in Brent, Southwark. Hackney, and Haringey. Make no mistake, your home and your tenancy are no longer safe, and we advise all social housing tenants, in this most rotten of boroughs, to treat all statements, reassurances or promises made by councillors or officers of RBKC with extreme caution. We call on all social housing residents to wake up to the likely implications of this new policy. Spread the word to your neighbours. There is no time to waste and we need to start organising and taking action now to protect our homes, our communities and our tenancies.

N.B. This story has been picked up by the Guardian this weekend in an article that indicts both RBKC and Westminster, which has implemented a virtually identical ‘social cleansing’ policy. Read more here: