Posted on December 9, 2015 by grenfellactiongroup 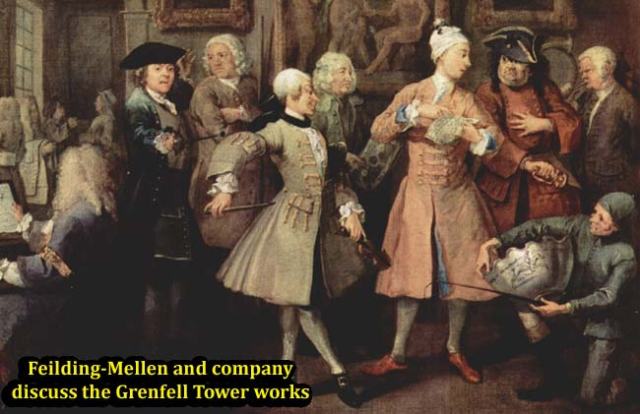 At the most recent Full Council Meeting held on Wednesday 2nd December Cllr Feilding-Mellen had the cheek  to inform his fellow Councillors that he considered that he was fully aware of the situation facing tenants and leaseholders in Grenfell Tower. If there is one thing in the world that we can be sure about it is the fact that Cllr Feilding-Mellen has not got the foggiest idea concerning the abuse and ill-treatment experienced by Grenfell Tower residents as a result of the Kensington Aldridge Academy construction and the improvement works to Grenfell Tower itself. We can be equally sure that even if Cllr Feilding-Mellen knew full well of the plight of Grenfell Tower residents he would do nothing to help us as he appears to despise poor people and, especially, those who have the temerity to live in Council housing.

Our roving reporter, Sredni Vashtar, was present in the Public Gallery at Hornton Street on 2nd December and below is an account of the exchange between Cllr Blakeman and Cllr Atkinson from the RBKC Labour Group and the heartless Tory Councillors.

Cllr Blakeman opened proceedings by arguing that when people are “decanted” for regeneration and refurbishment, they receive a statutory disturbance allowance of £4,900. People who remain in residence are entitled to nothing, so RBKC should use its discretion to pay an appropriate and acceptable “works in residence allowance” to compensate for the damage, disruption, stress, loss of amenity etc. suffered by these residents. She went on to highlight that coupled with the Academy and Leisure Centre building works, Grenfell Tower residents will have endured non-stop building works right on top of them for almost four years by the time the project is finished. Cllr Blakeman went on to point out that if Grenfell Tower had been demolished, even without demolition costs, paying disturbance allowances and re-providing 120 homes would cost the Council more than £24 million. By spending £11 million on the Grenfell Tower refurbishment, residents were helping RBKC to save at least £15 million. Cllr Blakeman then went on to list some of the problems experienced by residents since the Grenfell Tower Improvment Works had commenced. She highlighted that many Grenfell Tower residents are already out of pocket and are suffering extreme stress and the examples she gave included:

Cllr Blakeman then stated that the Tory amendment offering only to “rehang curtains or blinds or find a solution to help put up new window fittings” just rubs salt into an open wound. It became very obvious to everyone in the Public Gallery that the vast majority of the assembled Tory Councillors have no idea what is going on at Grenfell Tower despite the fact that Grenfell Tower may well set the precedent for the regeneration of other tower blocks in North Kensington. She said that the wheels are already coming off the Grenfell Tower programme and that RBKC must learn from this.

Cllr Blakeman concluded her speech by by stating that Grenfell Tower residents have been exploited for far too long and that while no one can restore the quiet enjoyment of our homes lost when the first sod was turned for the Academy and Leisure Centre development RBKC should at least acknowledge what we have had to endure.

Cllr Robert Atkinson then joined the fray and described visiting Grenfell Tower to deliver leaflets first thing in the morning when people were going to work and parents were taking their children to school. He said:

The Tory speeches and responses were quite unbelievable and show clearly that the neo-cons in Hornton Street have not got a clue about what Grenfell Tower residents have been put through and that they do not really care. For example, the architect of social cleansing in North Kendsington, Cllr Feilding-Mellen, said he was insulted when Cllr Blakeman said the Tories did not know what was happening at Grenfell Tower and that he knew exactly what was happening as he had visited and spoken to Rydon and TMO. He claimed that he had also spoken to residents before the works began.

Cllr Blakeman then floored him by pointing out that this comment proved that he had no idea what residents were really enduring; an observation which made Feilding-Mellen very angry and he went on to say that TMO and Rydon will visit every resident after the works are complete to calculate how much compensation they are entitled to.  Cllr Blakeman interjected to say that there is an issue here as residents may not have kept receipts so would therefore not be reimbursed.  She went on to question whether residents had been asked to keep receipts? (Of course not!)

Cllr Fielding-Mellen then went on to say that it was irresponsible for Cllr Blakeman to argue that everyone should receive £5,000 [although Cllr Blakeman had not asked for £5,000 but for an appropriate and acceptable amount.) He went on to state that  it was nonsense to suggest that residents had saved the Council money as the Council was spending a significant sum of money on these works. To prove that he really didn’t have a clue what he was talking about he concluded his defense of TMO/Rydon by stating that at the end of the day Grenfell Tower residents will have lovely flats in a lovely renovated building and they will be very pleased.

Cllr James Husband also from the Ruling Party who, most likely, does not even know where Grenfell Tower is, and has certainly never been seen within a mile of the Improvement Works, stated that it was an exaggeration to say that lives had been made “intolerable” or that residents’ experiences were “harrowing”. He said their experiences could best be described as  “very inconvenient”. He mumbled on that the Council had kindly found the extra money to do up Grenfell Tower and argued that otherwise the refurbishment programme would not have happened so quickly. [This is not true, given that the old heating system is on its last legs and would probably not have lasted another year and that the only reason Lancaster West got any investment at all was through the pressure applied by the Grenfell Action Group and other local stakeholders.]

Cllr Sam Mackover must have been smoking something funny as he took his turn to inform the meeting that he and other Councillors are planning a scrutiny visit to Grenfell Tower, so that the petition presented to the Council by aggrieved Grenfell Tower residents begging for help was unnecessary. Cllr Makover went on to say that residents have had to endure building works for only just over a year and unbelievably, that as the Council has already built for the residents a new Academy at £32 million and a new Leisure Centre at £17 million, it could be argued that RBKC had spent the equivalent of at least £100,000 on each flat and that Grenfell Tower residents will be really appreciative of the Council when the flats are finished.

So that’s about the size of it. Never has the gap in compassion, empathy and understanding been so obvious between the overprivileged Feilding-Mellen’s of this world and the underprivileged inhabitants of the Council’s housing estates over which Feilding-Mellen and his ilk wield such power.

A change has got to come!