Posted on January 9, 2016 by grenfellactiongroup 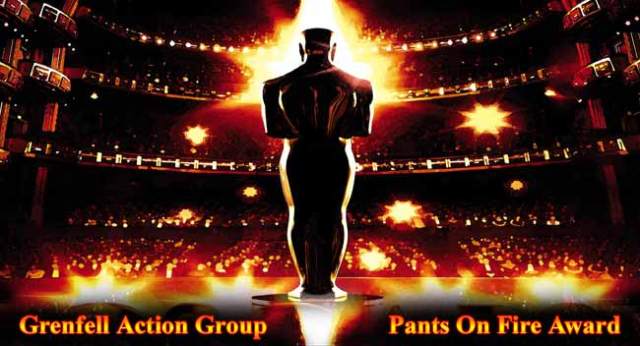 Residents of the Royal Borough of Kensington and Chelsea who have the misfortune to live under the tyranny of the TMO will not be pleased to hear that Fay Edwards, widely seen as the latest totally ineffectual Chair of the TMO Board, has been awarded the British Empire Medal as part of the Queen’s New Years Honours List:

Victims of the TMO know that this organisation is nothing less than a mini mafia that bullies and intimidates residents with impunity. It is totally dysfunctional at all levels and it beggars belief that the chairperson of the board of such an abusive failing organisation should receive any sort of honour at all. Even the dogs in the street know that what is needed to put the TMO right is an independent investigation of their failure to deliver basic services to tenants and leaseholders, and we believe that their puppet stooges should not be rewarded with royal gongs or any other honours.

Fay Edwards has stated to the Press that she isn’t sure what she has done to earn the British Empire Medal, and admitted that she doesn’t believe she deserves it (although she says ‘people’ keep telling her that she does). It is worth noting that she sat on the panel that was responsible for awarding the Grenfell Tower Improvement works contract to Rydons Ltd, and expressed ‘delight’ at that decision. We think it doubtful that a single resident of Grenfell Tower would share her ‘delight’, or would think Ms Edwards worthy of royal recogntion and reward for that disastrous bit of decision making. She was also instrumental in the creation of KCTMO Repairs Direct, which sought to improve repairs delivery by creating an in-house repairs company, effectively a subsidiary of the TMO itself. By all accounts that was another  disastrous decision. It seems to us that Ms Edwards may be as clueless as the common perception of her suggests, either that or as cynical as the TMO managers whose actions she, along with other board members, is supposed to scrutinise and oversee.

She was nominated for the new year honours list by none other than Roger Black, the Chief Executive of the TMO, whom the Board, under her stewardship, has a particular responsibility to scrutinise and oversee. One has to wonder, therefore, to what extent her ability to promote and facilitate that scrutiny, in a detached and independent manner, may have been compromised by Mr Black’s nomination of her for such a prestigious honour. One has to wonder also whether it was appropriate for Mr Black to have made the nomination in the first place, and whether it will now be possible for Ms Edwards to act in the best interests of RBKC residents, when her palm has been crossed with silver (in the form of this nomination) by the chief executive of the TMO, over whom she carries a particular duty of oversight and scrutiny.

The decision to grant such a prestiguous honour to the the chairperson of the TMO is presumably intended to signify royal recognition that it is an effective, efficient and well run organisation, and that these qualities are, at least in some part, due to the leadership of Ms Edwards. This is, of course, a convenient but nonetheless total fiction. Residents know that the TMO Board has been weak and ineffectual for many years, much to the detriment of the quality of life of TMO tenants and leaseholders. The Grenfell Action Group shares this latter view and believes that the award of a British Empire Medal to Ms Edwards is evidence of an unhealthy and complicit relationship between the TMO Board and the Executive. Throw in the considerable influence of a meddling and immoral Council and the result is a recipe for complete carnage and a depressing future for social housing in this most Rotten Borough.

The Grenfell Action Group recently called for a full independent investigation of the TMO. We are now wondering what the chances are that Ms Edwards will support this call and respond positively. When and if the the investigation we have called for is ever ordered we are confident that our dim view of the TMO as a negligent and incompetent body will be vindicated. We will then expect Ms Edwards to return her Empire Medal and apologise to residents for the pivotal role she has played in delivering unmitigated misery to so many RBKC residents on a daily basis over the last several years.

In the meantime we have decided to bestow one of our own ‘Pants on Fire’ Awards on Ms Edwards to add to her British Empire Medal. We make these awards occasionally to public servants whom we consider to be guilty of disingenuous or duplicitous conduct in office. We suggest that she share the award with Mr Black, her colleagues on the TMO board, and the entire TMO management team.