Kill the Bill – Lobby of Parliament

Posted on April 28, 2016 by grenfellactiongroup 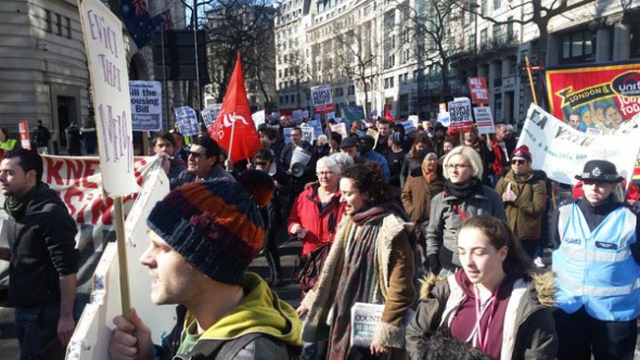 The much-criticised Housing Bill will be debated by MPs on Tuesday 3rd May, after a series of amendments by the House of Lords. A protest lobby will be held on the day between 12pm and 2pm at Old Palace Yard SW1P 3JY, and there will be a meeting of MPs, Lords and tenants between 3pm and 7pm in Parliament.

The Housing and Planning Bill threatens to destroy council housing, push up rents, and take away secure tenancies. If it passes, millions more people will be trapped in insecure, expensive private renting. Long-term stable communities will be broken up, with homes sold off, making way for more luxury redevelopments. Opposition is growing as the threat to present and future housing is exposed by Council leaders and Lords, media reports and growing opposition from tenants and campaigners – 10,000 marched on 13th March.

It is more important than ever now to keep up the numbers on these demonstrations, to keep pressure on the legislators and maintain public awareness of this vital issue. 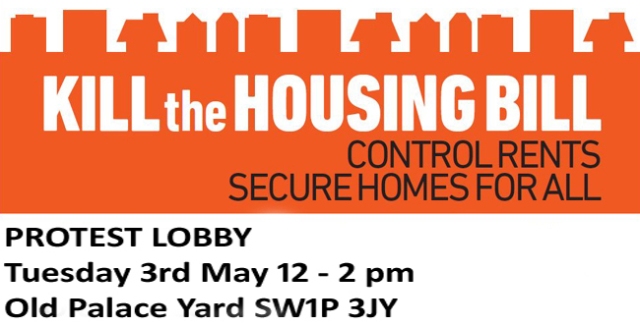 This entry was posted in Uncategorized and tagged affordable housing, Kill The Bill, Kill the Bill Lobby 2016, March against the Housing Bill, Social cleansing. Bookmark the permalink.
Loading Comments...
%d bloggers like this: