RBKC- Snouts in the MIPIM trough?

Posted on October 4, 2016 by grenfellactiongroup 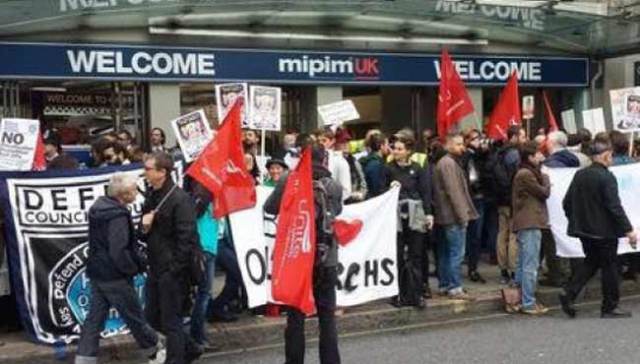 The Grenfell Action Group officially became members of the Radical Housing Network (RHN) back in early 2014. One of the first issues that the RHN brought to our members attention was the immoral nature of a property fair held every year in Cannes, France and at Olympia, London called MIPIM, whose sole purpose was to carve up our social housing and public land among property developers.

In the autumn of both 2014 and 2015 members of the Grenfell Action Group supported the mass protest of MIPIM at Olympia organised by the RHN and let delegates know that they are not welcome in our city.

In 2014 a member of the Grenfell Action Group wrote to Cllr Paget Brown, the Leader of RBKC, and received assurances that no representatives from our Council would be attending MIPIM. This assurance subsequently turned out to be invalid after Cllr Cockell (aka Pooter) was spotted and photographed at the event.

It was, therefore, very upsetting for the Grenfell Action Group to hear that Cllr Feilding Mellen may have attended MIPIM in Cannes, earlier this year, as recently disclosed on the Hornet’s Nest website.

We have published a letter to Paget Brown, written by a member of the Grenfell Action Group, in full below:

As you are aware there are many members of our community who are very concerned that the position of RBKC Cabinet Member for Housing, Property and Regeneration is occupied by Cllr Feilding Mellen who is the director of a property development company called Socially Conscious Capital.

We believe that this is a direct conflict of interest and that Cllr Feilding Mellen will not be able to listen objectively to those community members who don’t view their homes and lives through a prism of regeneration and developers profit.

Please can you inform me whether Cllr Feilding Mellen or any other Councillor or representative of RBKC attended the MIPIM conference in Cannes earlier this year?

If so, please can you provide me with details of who paid for travel, hotel expenses and the conference entrance fee?

Please can you give me specific details of what business was discussed at MIPIM and provide me with any documents, minutes or other record of this meeting?

Please can you also confirm for me whether any Councillors or representatives of RBKC will be attending MIPIM when it arrives back at Olympia in the middle of October 2016?

Last time I posed you this question, in 2014, you responded by stating that no Councillors from RBKC would be attending MIPIM which was an untruth as Cllr Cockell was subsequently photographed at the sordid property fair. Let’s hope that you can be a bit more honest this time around?

Finally, I would also like to draw your attention to the fact that Cllr Feilding Mellen is rumoured to have had a recent meeting with a Mr Bingle who describes himself as running a political and media relations consultancy with a particular focus on property. Please can you inform me why one of your Councillors would want to meet with Mr Bingle and what Council matters were discussed at this meeting? It appears that there was no Council Officer present to record this meeting and I would like an explanation as to why this was so? Please provide me with any documentation, minutes or records relating to this meeting? Was the meeting paid for out of Council funds and has this been declared on Clrr Feilding Mellen’s expenses? If not, why not?

As soon as we have an response from Paget Brown  we will let our readers know as we believe that there could be a direct conflict of interest posed between Cllr Feilding Mellen’s responsibilities to RBKC and his own property development ambitions.