Posted on January 2, 2017 by grenfellactiongroup 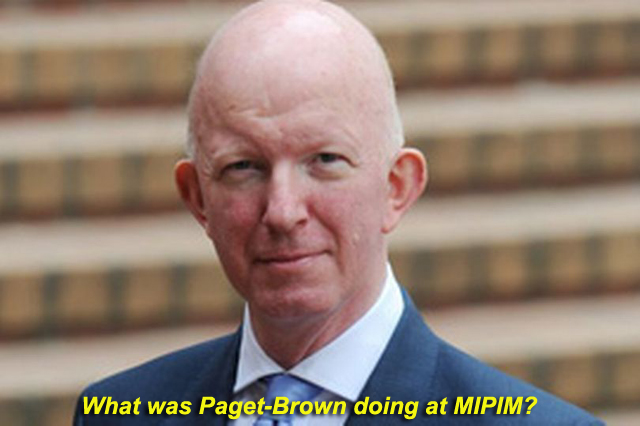 On 4th December 2016 a member of the Grenfell Action Group wrote to RBKC, under Freedom of Information legislation, after it had come to our attention that the current Leader of the Council, Nicholas Paget-Brown, had attended a private dinner at the invitation of MIPIM in 2015.

For those not in the know, MIPIM is an elite property fair that usually takes place at Cannes and sometimes at Olympia in West London. MIPIM brings together the most influential players from all international property sectors – including office, residential, retail, healthcare, sport, logistics and industrial – offering unrivalled access to the greatest number of property developers projects and speculators worldwide. It is designed to facilitate business between investors, corporate end-users, local authorities, hospitality professionals, industrial and logistics players and other real estate professionals.

We believe that attendance at this event by the Leader of the RBKC Council signifies the Council’s intention to destroy local communities by entering into lucrative property deals involving the sale of land, presently used for social housing, to the highest bidder. The Grenfell Action Group do not believe that any good can come from the association between our Council and MIPIM and that the interests of  the residents of North Kensington are not served by attendance at this shady, elitist and highly discriminatory event.

In order to better understand the motivation for why the Leader of RBKC would want to  attend MIPIM  we asked the Council to provide us with details of who had paid for Cllr Paget-Brown to attend this event. We went on to pose related questions such as who had Cllr Paget-Brown met with at MIPIM and what matters had he discussed?

Of course, we did not expect the Council to be forthcoming with the facts that we had requested but we were nonetheless surprised by the evasive and equivocal way in which our request for this information was treated. We received the following response from RBKC on 5th december 2015:

“The Council hold no records in relation to any attendance by Cllr. Paget-Brown at any MIPIM dinner in 2015 or any of the matters you mention in your paragraph above.  Cllr. Paget-Brown’s list of declarations of gifts and hospitality can be found here on the Council website.”

When we examined Cllr Paget Brown’s declarations of gifts and hospitality we learned little about his attendance at MIPIM but we learned a great deal more about how the Leader of our Council spends much of his time supposedly representing his constituents best interests. We will be blogging on this fascinating subject in due course and shining a light on the kind of relationships the Leader of RBKC cultivates and believes it proper to pursue.

As for the subject of our original enquiry, we learned only that on October 21st 2015 Cllr Paget-Brown had “by invitation attended as a guest at a dinner held in the Belvedere Restaurant, London W8 to mark the MIPIM conference at Olympia”.

It seems to us that Paget-Brown can only have received this invitation because he is the current leader of the RBKC Council and must therefore have attended the dinner in this capacity. We can think of no other reason why he would have been singled out for such an invitation, and yet the Council claims to have no record of this! The Grenfell Action Group believe that our public servants have a duty to be transparent and honest with the residents that they purport to serve. We believe that we have a right to be informed of what Cllr Paget-Brown was up to when he attended the MIPIM dinner in this exclusive Kensington restaurant, what matters he discussed and what deals, if any, he made. We believe that the response to our original Freedom of Information request was totally inadequate and insulted the open democratic process. Not to be thwarted by the Council’s response a member of our group has written back to RBKC and demanded the following information:

“Please can you inform me if the Leader of RBKC was attending this MIPIM dinner as a representative of the Council and who paid for his ticket (ie was his dinner paid for out of Council funds or was it paid for by a property developer)? Please can you inform me the reason the Leader of the Council gave for attending this dinner, who he had talks with, what matters of Council business (or private business if Cllr Paget Brown claims not to have been representing the RBKC) were discussed at the dinner, and whether these discussions were later minuted and recorded with the Council?  Please can you inform me whether Cllr Paget-Brown received any material benefits as a result of his attendance at this MIPIM dinner and, if so, did he record these with the Council”?

The letter went on to point out that  if the Council chooses to continue not to provide us with the information that was originally requested then we will request that this matter is referred to the Chief Solicitor and Monitoring Officer as a matter of some urgency. The Grenfell Action Group believe that we are entitled to receive the information that we have legitimately requested and we have informed the Council that, if we do not receive a satisfactory answer from the Council’s Monitoring Officer we will refer this matter to the Information Commissioner’s Office to obtain an independent decision on this matter without further delay.

Finally, the letter requested that the RBKC Chief Solicitor and Monitoring Officer inform us if it is appropriate for a Council representative (Cllr Paget Brown) to attend a dinner full of property developers and their quislings without being accompanied by a Council Officer and to provide the Grenfell Action Group with the guidance offered to RBKC Councillors on this subject”?

Once we receive a response from RBKC we will, of course, update our readers. However, the RBKC can rest assured that the Grenfell Action Group will not be satisfied until we we are furnished with full and transparent answers to the questions that we have posed. It would seem that Paget-Brown and his ilk think that they have a right to rule over us like despotic kings with no need to be accountable to the electorate they are elected and paid to serve. One day, this attitude will be the cause of their undoing and they can’t say that they have not been warned!

1 Response to Paget-Brown and MIPIM