Posted on February 27, 2017 by grenfellactiongroup 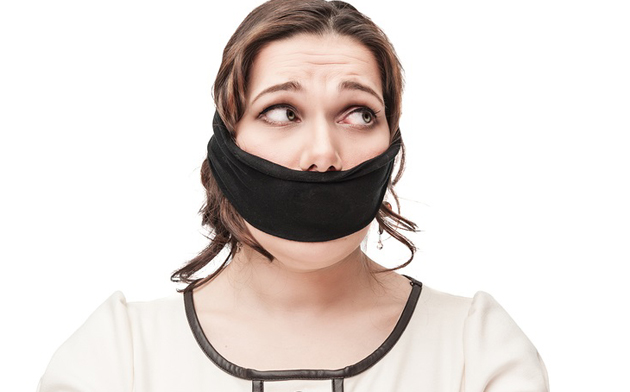 Sad news has reached the Grenfell Action Group concerning the future of the Tenants Consultative Committee (TCC) one of the only forums that allowed true dialogue to take place between the Royal Borough of Kensington and Chelsea, their ‘arms-length’ landlord’s, the Kensington and Chelsea Tenants Management Organisation (KCTMO), and representatives from many of the Borough’s resident associations.

Cllr Feilding-Mellen and RBKC cancelled the meeting scheduled for January 2017, and all further meetings for the forseeable future. This will deny tenants the opportunity to have their voices heard and their concerns addressed by those in authority. It is a great shame that Cllr Feilding-Mellen seems more motivated to travel to Cannes, France to attend the annual MIPIM conference (an event for the elite of the property development sector) than he is to engage with what should be his priority – addressing the concerns of those living in RBKC owned social housing. The Grenfell Action Group believes that this shows that he is more interested in looking after the interests of the 1%er’s than he is in making sure that the Borough’s tenants are listened to and their concerns treated with respect!

The Tenants Consultative Committee was comprised of nine councilors (seven majority party and two minority party) and two representatives from each of the Borough’s recognised tenants’ or residents’ associations. In addition, it was attended by high ranking Housing Officers from RBKC and also by members from the “top brass” at the KCTMO including CEO Robert Black. This forum has been a regular fixture between the Council, the KCTMO and residents for as long as anyone can remember and the Grenfell Action Group believe that its cancellation by the Council is unwarranted and indefensible.

The Tenants Consultative Committee did not receive widespread publicity but it was a vital forum and was much valued by resident associations as it allowed them to meet with the Council and the KCTMO to consider strategic housing documents and strategic housing policy matters. In addition, it provided a platform for the  discussion of annual draft budgets (including rent levels) and major work programmes and to consider any policy matters raised by individual tenants’ associations. In recent times the TCC has provided a valuable space for issues concerning “estate regeneration” to be discussed. 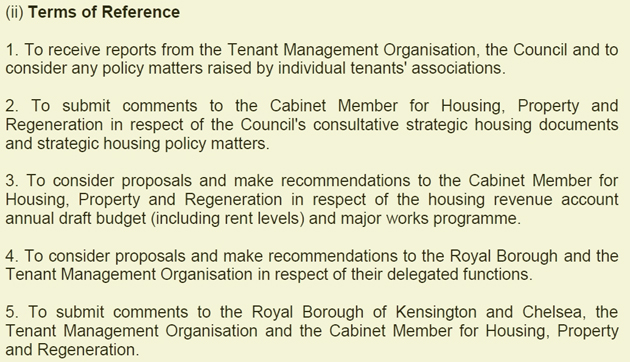 Under the previous TCC Chair, Cabinet Member for Housing and Property Tim Coleridge, the Committee met twice a year. When the new TCC Chair, Cabinet Member for Housing, Property and Regeneration, Rock Feilding-Mellen took office this was cut to once a year and has now been completely dissolved! It is rumoured that Feilding-Mellen does not have the same skill set as his predecessor, Cllr Coleridge, who (although not always popular with resident association members) always conducted the TCC meetings in a respectful manner. The word on the street is that Feilding-Mellen does not possess the patience, authority or poise to respond appropriately to the legitimate concerns brought to his attention at this forum. One can only speculate whether this may have something to do with the fact that he wasn’t educated at Eton, unlike the unflappable Cllr Coleridge!

The Council has provided the following statement in respect of the decision not to hold any further meetings:

“The original aim of the TCC was to consult on the annual rent setting. However, since the Government’s decision to reduce rents by one percent per annum for four years, the consultation process is no longer required as there is no decision for the Council to make”.

The Grenfell Action Group believe that the above statement is highly disingenuous and the decision was taken without any consultation with Resident Associations. We believe that it completely ignores the fact that the Tenants Consultative Committee’s remit was far wider than the subject of rent setting. The myriad different topics discussed at the TCC are clearly evidenced in the minutes from their 2016 meeting that can be accessed via the following link showing the wide range of issues considered by the panel members:

The Council are making spurious claims that the TCC is not needed as there are alternative means for resident associations to voice their concerns to those in authority. The Grenfell Action Group  strongly disagree with this assertion and we challenge the Council to provide evidence of alternative forums where the voices of tenants are as fully considered, minuted and responded to. To suggest that the KCTMO’s annual general meeting or the Area Review Boards serve this purpose is entirely misleading and we believe that the Council knows this full well!

The dissolution of the only form of direct two way communication between RBKC/ KCTMO and the Borough’s resident associations is a complete travesty. It appears to the Grenfell Action Group that Cllr Feilding-Mellen is acting like the notorious Donald Trump and ruling by diktat, having decided to treat Council tenants and their concerns with utter contempt. Council tenants and their representatives deserve to be treated with more respect than this. The dissolution of the Tenants Consultative Committee is a severe blow to the rights of residents and shows only too well that RBKC have no interest in communicating with the very people that they are elected to serve.

It seems to us that the RBKC Cabinet Member for Housing, Property and Regeneration prefers to spend his time organising private business deals for his own property development company at MIPIM rather than engaging with his constituents in his own backyard. We predict that this is a decision that will come back to haunt Feilding-Mellen sometime in the near future.