Posted on April 3, 2017 by grenfellactiongroup 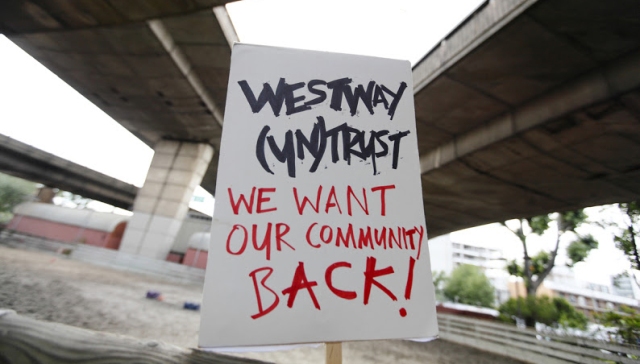 Many readers of this blog will be aware that the Westway Trust was originally set up in the early 1970’s to compensate the local community for the negative impacts of the imposition of an elevated motorway, the A40(M), better known as the ‘Westway’, running through the heart of our community. The Westway Trust was created to hold in trust, develop and manage, on behalf of the North Kensington community, the 23 acres of derelict land that remained beneath the new Westway flyover. Since its creation the Westway Trust has had a chequered history and today we really have to ask who the apparatchiks of the Trust are actually serving and benefiting, other than themselves.

The Grenfell Action Group believes that the RBKC Council recognised some time ago that the land under the Westway is a potential goldmine that can be farmed off to their pals in property development and private education and not necessarily used primarily to the advantage of local working class people. We believe that the Westway Trust has been morally corrupted by the likes of Cllr Spalding, Cllr Cyron and Cllr Feilding-Mellen from RBKC who have spent their time on the Westway Trust Board pushing this neo-Con Council’s agenda and ensuring that the Trust moves in the direction of benefiting the rich and privileged rather than local people.

An examination of the Westway Trust’s finances appears to show that the Trust is totally self serving and has little interest in making links with or benefiting local community groups who don’t adhere to their myopic view of the future of the land and resources that lie below the A40 flyover. In this blog we will highlight how, we believe, the Westway Trust uses the extensive resources that they are meant to spread among the North Kensington community for their own benefit and personal advancement. Let us look, first, at the Westway Trust’s finances that are published annually and are freely available for all to access on the Trust’s website

In 2015/16 the total income of the Westway Trust from all sources was £8.078 million and their total expenditure was recorded as £7.87 million. The Trust holds total assets, including property and land  of £46.771 million which it is entrusted to manage for the benefit of the local community.

The total net current assets that exclude property and land  are £4.038 million which is raised largely through rental of land and premises under the Westway. With so much money floating around one would think that the local community should be able to see tangible benefits from the existence of the Westway Trust but this is sadly not the case! What is particularly shocking is that instead of the £8.07 million being used to benefit the local community a mind boggling 43% of this money is spent on the Westway Trust’s own inflated staff costs. These staff costs (that, we understand, include gold plated pension contributions) total an eye watering £3.479 million per annum.

During 2016, one of the Westway Trust Directors was engaged through a consultancy agreement. Estelle Burns, Director of Change was engaged through a personal service company, Juniper (HRM) Consulting Limited. The fees paid to that company in the year were £44,000 reduced from the sum of £78,000 that Juniper (HRM) Consulting received in 2015. The Grenfell Action Group believe that it is highly inappropriate for the Westway Trust to haemorrhage so much of it’s income on extortionate salaries and consultant’s fees, especially when so much of this money is ferreted away into the hands of so few!

The Westway Trust states in its remuneration policy that staff are paid in a way “which ensures we attract and retain the right skills in order to have the greatest impact in delivering our charitable objectives”. What they fail to say is that they do not appear interested or willing to recruit any senior staff members from among the local North Kensington community. It is a sad fact that a virulent kind of nepotism seems to be at work at the Trust that deems local people not fit for managerial level employment.

Since Angela McConville left her previous position as company secretary of ‘Vital Regeneration’ in late 2013 almost all subsequent senior staff appointments have been made from this same company! It is our understanding that Christian Tilleray, Director of Culture, Learning and Enterprise was recruited from ‘Vital Regeneration’. It is also believed that Gary Thomas, the Community Engagement Officer, and Marie Monaghan, Head of Environment and Local Economy, were previously at ‘Vital Regeneration’.

It is worth noting that ‘Vital Regeneration’, like the Westway Trust, is a registered charity, but also a private limited company, registered at Companies House. Vital Regeneration’s claims to legitimacy rest entirely on its claim that it supports the homeless and underprivileged by facilitating access to employment opportunities and by supporting small business start-ups. Ironically, however, its board of directors includes at least one banker and others involved in venture capital, private equity, accountancy and property management. Make of this what you will, but in this Grave New World we in the Grenfell Action Group find ourselves, as members of the underclass, increasingly distrustful of social engineering via trickle-down philantropy. We believe we have a right to demand social change and should not have to beg for it. We also suspect that Ms McConville and her ilk may have imported a morally corrupted and self-serving version of the ‘Vital Regeneration’ business model into the Westway Trust, making radical and unwelcome changes to its fundamental role and function within the North Kensington community.

The Grenfell Action Group would also question why ex RBKC Councillor and former Chair of Planning, Terence Buxton, has been co-opted as a member of the Westway Trust’s Property and Regeneration sub-committee. We understand that Buxton is reputed to own a number of properties in the north of the Borough which may have created a conflict of interest between his private interests and his role on the Trust’s sub-committee. Terrence Buxton is believed to have been relieved from his position as a Councillor in the Rotten Borough due to some kind of political skulduggery and we fear that he may be an inappropriate appointee to such a sensitive and controversial position at the Trust.

As if these abuses of our community were not already bad enough, then the way that the Trust goes about managing its finances is truly shocking.  In 2015/16 it was responsible for awarding the sum total of £551,609 to local voluntary organisations in the form of grants. but the Trust also spent a total of £493,000 on IT, engagement, communication and marketing. In other words, they spent nearly as much money telling us how wonderful they are as they did actually ‘being wonderful’ by handing out funds entrusted to them by numerous charities and RBKC.

The Grenfell Action Group believes that the Westway Trust has become a morally corrupt and unhealthy proxy of RBKC that seeks to disenfranchise the residents of North Kensington and marginalise, rather than empower, local residents. It appears to have morphed in recent years into a body that exists solely to collude with the Council’s gentrification of North Kensington while providing lucrative employment opportunities for its own senior management, filling these roles mostly with ex-employees of ‘Vital Regeneration’. We do not believe that the current actions of the Westway Trust are consistent with those of a bona fide local charity and that the inflated salaries they pay and their profligate spending of public money on marketing and PR is highly questionable and nothing short of immoral.