Posted on April 27, 2017 by grenfellactiongroup 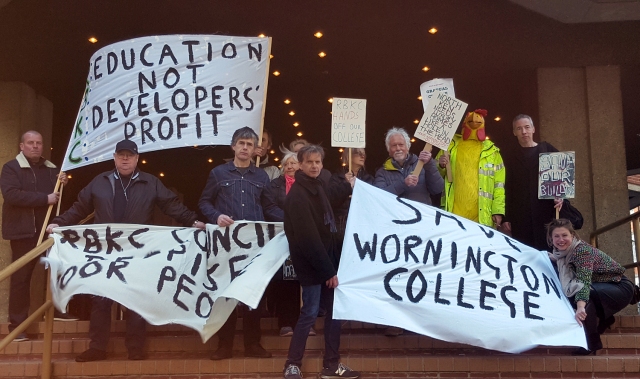 “Councillors, I am here to present our petition on behalf of the Save Wornington College campaign. When I refer to Wornington College I am talking about the Kensington and Chelsea College site that is situated in Wornington Road and has been serving the educational needs of the North Kensington community since the late 1950’s.

This much treasured institution has transformed the lives of a multitude of the Borough’s residents by providing courses in ESOL, Access to Higher Education, Teacher Training, the Creative Arts and Health and Social Care.

However all this is set to change as the Royal Borough of Kensington and Chelsea have now purchased the freehold of the College building and intend to redevelop the whole site as housing with an unseen commitment to re-provide the community with a smaller educational space.

Our campaign has the following demands which we would like to ask you to support: We are requesting that the College building is not demolished, that there are no cuts to teaching or support staff, that the volume and diversity of courses at the College are protected and that the creche and other facilities are maintained in situ.

There has been a substantive educational presence in Wornington Road for nearly 150  years since the first Board School was opened here in North Kensington in 1874. The community is fully aware of the value of the College which has provided educational opportunities for the poorest and most vulnerable in our community for many, many, years. Generations of families in North Kensington and throughout the Borough have been educated within the building as it exists. From teaching English to the Vietnamese Boat people in the late 70’s, to the teaching of English to speakers of other languages through to access to university and other career paths.
Just last year a local homeless student succeeded in gaining entry to Oxford University. On the other end of the social spectrum the Duchess of Cambridge is known to have completed a computer course at the College

The vast majority of the local residents of North Kensington have not been as lucky as you and Wornington College is a vital resource that provides education to a section of the community that needs it most. The College has given working class people and people from diverse ethnic backgrounds the chance to gain learning and progress in life. This is particularly relevant to women in the community and Wornington College is responsible for enabling local people to learn a trade or profession and gain confidence and pride in themselves.

The College has enabled many members of the North Kensington community to use their education to become more constructive members of society and instilled a passion for learning that is transferred through the family and onto future generations. Wornington College is responsible for allowing those who may have failed at school the first time around a second chance and has produced many teachers, nurses, social workers, lawyers many of whom return to the local community to pass on these skills.

The North Kensington community has suffered greatly in recent times from the loss of it’s public resources into the hands of  property developers or private education providers. These actions are viewed with disdain by the local community who see this behaviour as nothing short of naked asset stripping by a Council who should know better.

Cllr Feilding Mellen is on record as describing the North of the Borough as “the new South” but this can only come about if the Council destroy our existing ethnically diverese and working class community’s through social and ethic cleansing. At present, we believe, this evil and abusive neo-Con policy is being implemented with the plan to eradicate vast swathes of our social housing under the pretext of “regeneration”, we have already lost our prized North Kensington Library building handed over the Council’s friends at the Notting Hill Prep School Ltd along with the Westway Information Centre.

The Council have had a hand in closing the Maxilla Children’s Centre and are working with the Westway Trust to turn the land under the flyover into their own private goldmine. We do not wish Wornington College to face the same fate and be sacrificed at the alter of property developers profits.

We are very concerned at the manner in which RBKC went about purchasing the freehold to Wornington College without the property being put on the open market and without consulting the local community or informing the Labour Group Councillors of their intentions.

We believe that under the Council’s Consolidated Local Plan 2015 the current D1 use of the site falls under the “social and community uses” category and is protected under policy CK1. We believe that redeveloping the site for predominately residential use would be contrary to policy CK1 and we are calling on the Council to ensure that the entire building remains in educational use, that the level and diversity of course provision are protected, that there are no cuts to staffing levels and that the creche and other facilities are maintained on the present Wornington College site.

We are asking you to look into your consciences and put an end to the bullying and theft from our beleaguered community by supporting our demands and protecting the educational wellbeing of the residents of North Kensington and the long-term future of Wornington College.”