Posted on June 12, 2017 by grenfellactiongroup

Back in April 2016 the Grenfell Action Group published a blog highlighting our concerns regarding the long term future of Wornington College. We provided a link to a RBKC Cabinet Key Decision report (KD04801R) that revealed that the Wornington College building had been secretly sold to the Council for demolition, after which the site would be privately redeveloped as housing.

The report was markedly vague on specifics, presenting instead a mish mash of options that ranged from selling the entire site (planning permission included) to a private developer or alternatively entering into a partnership with a Private Rented Sector (PRS) developer. The plans appear to have been conditional on retention of some unquantified educational component, provision of some ‘affordable housing’ by the developer, and possibly an option for the Council to to repossess  part of the finished development for use as decant housing for council tenants displaced from redevelopment elsewhere. Under this mish mash of half baked ‘planning’ many, perhaps most, Wornington students would presumably have to travel to Hortensia Road in Chelsea if they wished to access education.

Rather than deal with the concerns raised by our blog, and by supporters of the Save Wornington College Campaign, the management at Kensington and Chelsea College attempted to demonise those trying to protect this much loved educational institute. Members of the KCC management team abused their power by attempting to intimidate our supporters, and shamelessly spread rumours that the Save Wornington College campaign was responsible for declining student enrolment numbers at Wornington and for endangering the future of adult education in North Kensington. When Interim Principal Michelle Sutton was invited to provide credible evidence that the Save Wornington Campaign was responsible for these negative effects she failed to do so.

Instead of working in partnership with the North Kensington community, acknowledging the management and financial problems at KCC, and the threat to the long term future of Wornington College following the departure of Principal Mark Brickley, the College opted instead for a disingenuous propoganda campaign. Using similar tactics to those employed by the neo-Cons at RBKC, when they sold off the North Kensington Library to their friends at Notting Hill Prep School, the KCC management claimed, in a Press Release in April 2017, that the Wornington building was no longer fit for purpose, was too large and could not meet the needs of those students and staff with disabilities. The KCC Press Release also sought to negate and dismiss the fears and concerns of the existing College’s supporters by stating that KCC remained committed to expanding its presence in North Kensington, claiming that it planned to replace the Wornington facilities on-site or nearby with modern state-of-the-art facilities for both school-leavers and adults, creating space for increased student numbers and potentially more courses.

We now understand that despite these promises the future of Wornington College and the provision of adult education in North Kensington is still very much under threat. Instead of securing the long term future of Wornington the KCC Board appears to have begun making existing staff redundant, pending a merger deal in which they will become the subserviant partner to a rival adult education college and in which they are unlikely to have any say in whether adult education will survive in any form in North Kensington.

In a serious and troubling development, it has come to our attention that members of the Wornington College teaching and auxillary staff have been issued with voluntary redundancy notices. These have been distributed to staff recently and cast doubt on KCC’s previous claim that staff numbers will be protected by virtue of an increase in student numbers and an expansion in the number of courses that the College will be offering.

It is our understanding that members of staff who might be tempted to accept offers of voluntary redundancy will not have their length of service or seniority taken into consideration as part of any financial settlement and will simply receive a statutory redundancy pay out. Any member of staff who accepts voluntary redudancy and is below retirement age will not be able to apply for social security payments such as unemployment benefit, housing benefit, etc if they fail to find replacement jobs, as they will be deemed to have made themselves intentionally unemployed.

It is also our understanding that the KCC Board were preparing to make a vitally important decision concerning the future of the College at a Corporaton meeting last Tuesday 6th June. We applied for permission to attend this meeting but were refused, ostensibly due to the sensitivity of the issues scheduled for discussion. It is a matter of record that major changes in adult education have been encouraged at a national and regional level following major cuts to government funding and a recent government review of further education which recommended that local colleges (such as Wornington) should merge with neighbouring colleges in order to protect their longer term prospects.

In line with this recommendation KCC and City Lit have conducted merger negotiations on two occasions since 2012. Both of these attempts failed, the most recent, earlier this year, because KCC failed a due diligence test performed by City Lit, apparently because of poor financial viability and poor Osted inspection results over the past three years. We have made a Freedom of Information request to City lit seeking access to the due dilignce report. We will publish this when and if we acquire it as it may shine some light on the management failings at KCC under former Principal Mark Brickley. The failure of KCC to satisfy this due diligence test has left KCC in an invidious position and vulnerable to a hostile take-over from either Ealing, Hammersmith and West London College or the recently merged North West London/City of Westminster College.

Ideally we would all prefer that KCC remain a fully independent college serving the specific needs of the local RBKC communities but we acknowledge that, in the present austere financial climate, a merger appears to be a necessary evil. With this in mind, we feel that it is a great shame that the proposed merger between KCC and City Lit failed. The benefits of a merger with City Lit have been explained in the minutes of previous confidential discussions by the Governors of KCC who stated that:

KCC students have good reason to fear the consequences of the failure of the City Lit merger. It has left KCC extremely vulnerable to a hostile take-over by either Ealing, Hammersmith and West London College or the North West London/City of Westminster College and we believe that such an outcome will greatly disempower and reduce the quality of our local education provision. There are concerns also that if either of the two aforementioned colleges are successful in a take-over of KCC the provision of adult education at the Wornington Centre, and in North Kensington generally, may cease altogether and adult educational courses may be halved at the Hortensia Centre.

These concerns are based on hard evidence obtained through Freedom of Information requests and access to supposedly confidential minutes of the KCC Corporation. We also have a copy of an email sent to RBKC councillors by Tony Redpath, a member of the KCC Board of Governors and a senior Officer at KCC in January 2017, that refers to Kensington and Chelsea College as some kind of tempting carcass that other ‘suitors‘, including Ealing Hammersmith and West London College and North West London/City of Westminster College ‘are already circling’ and waiting to devour. Redpath goes on to identify the predatory nature of such a take-over in that ‘KCC’s problem, put baldly, is that it’s attraction to other College’s is based on it’s assets rather than it’s activities’ and that following any take-over ‘a longer than anticipated period of change and uncertainty for the College beckons’. We believe that this statement from Tony Redpath unequivocably highlights the clear and present danger that faces the future of adult education in RBKC.

Redpath’s analysis is entirely consistent with minutes already quoted of a KCC Board meeting in 2012 when a hostile take-over by Ealing, Hammermith and West London College was characterised as an unwelcome but distinctly possible outcome. Confidential minutes from that Board of Governors meeting state the following: 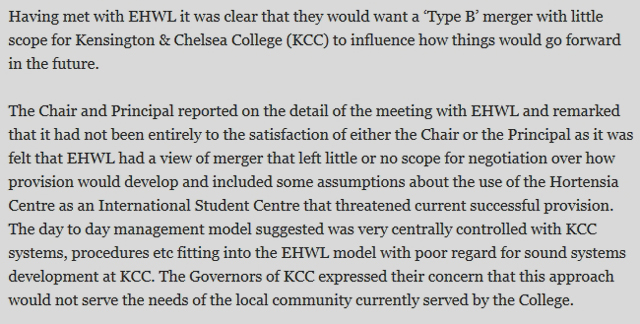 We have little doubt, based on the evidence above, that the kind of take-over that now seems inevitable will be extremely detrimental to the future of adult educational provision in RBKC generally, and North Kensington in particular. We believe that the failure of the proposed merger with City Lit has left KCC at the mercy of more powerful and predatory organisations that are primarily concerned with KCC’s financial assests and property portfolio rather than with providing the adult educational services our communities need.

The KCC Board of Governors and senior management team need to be held fully and properly accountable for their failure to secure a more propitious merger with City Lit. This failure has left KCC open to a hostile take-over by either Ealing, Hammersmith and West london College or City of Westminster/College of North West London. Both of these outcomes could best be described as worst case scenarios but have somehow become the most likely outcome we can expect. The KCC Board should be held accountable for this!