Grenfell Tower – The Truth Will Out

Posted on June 29, 2017 by grenfellactiongroup

On Wednesday 21st June the Chief Executive of RBKC resigned. In a statement CEO Nicholas Holgate said that the Government’s Communities Secretary, Sajid Javid, had ‘required’ the leader of the Council to demand his resignation. Council leader Nick Paget-Brown, affectionately known as ‘Piglet’ to those who know and love him, is shown on the left in the picture above. Beside him is the infamous Robert Black, CEO of Kensington and Chelsea TMO, and on the right is Rock Feilding-Mellen, Deputy Leader of the Council and Cabinet Member for Housing, Property and Regeneration. Rocky is not so affectionately known to the Grenfell Action Group as ‘Little Lord Rock Weilding Felon’.

Holgate’s resignation came after intense criticism of the Council for the way it responded to the Grenfell Tower tragedy and for its historical neglect of social housing and of the poorer residents of the borough. We have to ask why Holgate was sacrificed while these three rogues remain in power and in office. They need to go, and the sooner the better.

Before the fire that claimed so many innocent lives it was widely believed among Grenfell Tower residents, a belief that still persists among survivors of the disaster, that the cladding had been installed not merely, or even primarily, for the benefit of Grenfell residents, but to satisfy the ulterior motives of the TMO and RBKC to assist in the creeping gentrification of the area. There is some documentary evidence that supports this belief. The decision notice granting planning permission for the project contained the following:

This extract from the planning consent notice is noteworthy for its insistence on ‘ensuring that the character and appearance of the area are preserved and the living conditions of those living near the development are suitably protected‘. This can be construed as a reference to the nearby conservation areas and also to prospective future residents of the luxury apartments currently under construction on the Bomore Road corner of the Leisure Centre. Equally noteworthy is the insistence that ‘… samples of materials shall be submitted to and approved in writing by the Local Planning Authority before the relevant part of the work is begun and the works shall not be carried out other than in accordance with the details so approved and shall thereafter be so maintained’

The first part of this requires no further explanation and the significance we would attach to the latter statement is that the responsibilities of the planners at RBKC did not end once they had granted planning permission for the works. They remained responsible for inspecting the materials used and ensuring they were as specified in the planning application and that the works also were carried out according to specification. It is our understanding that Council inspectors visited the site on numerous occasions to carry out inspections intended (?) to discharge that ongoing duty of scrutiny and care.

According to the Guardian, Omnis Exteriors supplied a cheaper, more flammable version of the two available Reynobond cladding panels for use on Grenfell Tower. Managing Director John Cowley confirmed that Omnis supplied the aluminium composite (ACM) cladding, He said Omnis had been asked to supply Reynobond PE cladding which is £2 cheaper per square metre than the superior fire resistant alternative Reynobond FR. According to Cowley Omnis supplied this cheaper flammable cladding on the orders of the Design and Build Team of the Grenfell Regeneration project. Sub-contractors Harley Facades confirmed that they installed the panels supplied by Omnis.

Underlying the cladding was a polyisocyanurate (PIR) insulation foam named Celotex RS5000. According to studies this material burns when exposed to a fire of moderate heat and intensity. Once ignited it burns rapidly and produces intense heat, dense smoke and irritant flammable gases which are extremely toxic. The toxic gases produced include carbon monoxide and hydrogen cyanide. The burning PIR attached to the exterior of Grenfell Tower is believed to have released enough poisonous hydrogen cyanide gas to potentially fill every dwelling in the building, and the simultaneous release of carbon monoxide and hydrogen cyanide is more lethal than if they are released separately.

Section 2.1 of the Grenfell Tower Planning Application Sustainability & Energy Statement concerned the insulation that underlay the rain screen cladding referenced above. It specified that Celotex FR5000, and not Celotex RS5000, was to be used at Grenfell Tower (please note that the prefix ‘FR’ signifies that the product is designed to be fire resistant).

Following the inferno at Grenfell Tower Celotex posted a series of press releases on their website beginning on Thursday 15th June and with updates on Friday 16th June and Saturday 17th June in which they confirmed that they had supplied Celotex RS5000 for use at Grenfell Tower, and not Celotex FR5000 as specified in the Planning Application.

In each update they included platitudes expressing sympathy for all those affected by the Grenfell Tower fire. Additionally the update on 16th June claimed that Celotex RS5000 had a fire safety classification of Class 0 in accordance with British Standards. Class 0 indicates that the product meets the highest fire safety standard.

However, on Saturday 17th June Celotex did a complete U-turn announcing that they would cease supplying RS5000 for use in rain screen cladding systems on buildings over 18 metres tall.

This raises serious questions that must be answered about this Celotex debacle, such as how, or even if, the highly flammable RS5000 achieved a Class 0 fire safety rating, and who, if anyone, approved its use at Grenfell Tower, and on what authority. Similar questions should be asked about the Guardian’s claim (above) that Omnis Exteriors supplied cheaper flammable cladding, on the orders of the Design and Build Team for the project, when a safer fire resistent alternative was available at a slightly higher cost.

A curious footnote to the Celotex saga can be found in the Health & Safety Datasheet for Celotex FR5000 which, unlike Celotex RS5000, one might reasonably expect to achieve a Class 0 fire safety rating, which it almost certainly did. The Health & Safety datasheet for this product contains the following guidance note:

Strange that a clearly combustible product that emits toxic fumes when ignited should be declared non-hazardous by the manufacturers and achieve the highest fire safety rating possible under British Standards. What do you think about that my friend?

Finally, the Grenfell Tower refurbishment was completed in May 2016, but that’s not the end of the story. Some months later a fire safety consultant for Kensington and Chelsea Council approved the installation of new gas risers and pipes in landings and stairways following a gas leak, but only if they were clad in “fire-rated” boxing. Sacha Jevans, Director of Operations at the Kensington and Chelsea Tenant Management Organisation, said that the National Grid assured the Council on 27 March 2017 that the pipes would be protected, but two-thirds of the horizontal pipes were still exposed when the disaster happened on 14th June. The works were originally undertaken by the National Grid’s gas distribution arm. In March, the firm was sold to a consortium, that included the Qatari government, and renamed Cadent Gas. Cadent said the ‘work was still ongoing to box in the horizontal pipes’ when the fire occurred. Gas pipes should never have been installed in these crucial fire safety zones in which no combustible material should have been allowed. 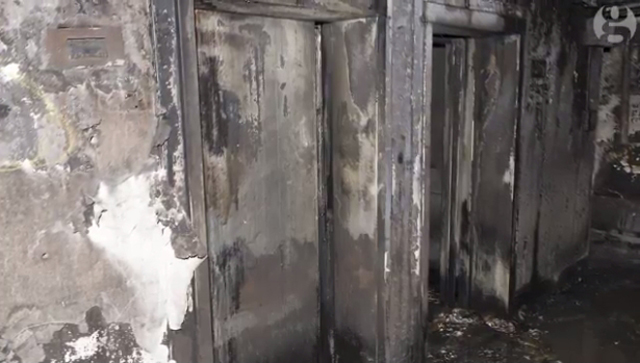 We usually end each blog with some carefully chosen wry or sarcastic comment. Under present circumstances that seems inappropriate. The point of this blog was to present as much evidence as we were able to unearth with our limited resources and access to the relevant documentation. This we have done. It is up to others now to use this evidence to help determine the causes of this terrible tragedy that has befallen our community and to assign the blame for what happened to those who should answer for it.