Posted on December 28, 2017 by grenfellactiongroup 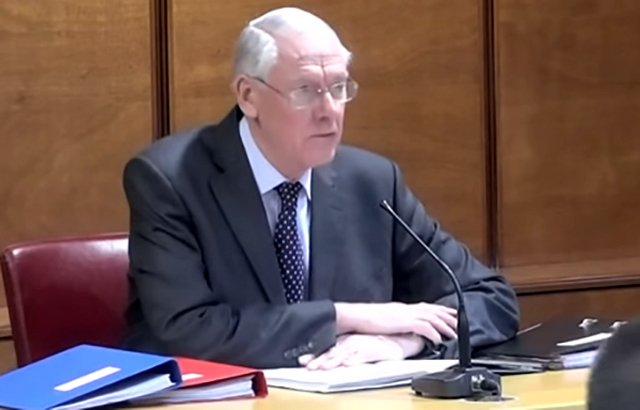 Arguably the most dramatic moment in the Grenfell Inquiry procedural hearings  on 11th and 12th December, occurred right at the end of the second day, when Sir Martin Moore-Bick invited any last representations from counsel. Nobody who had witnessed the day’s events could have failed to notice Sir Martin’s frequent references to the suggested advisory panel (which he clearly favoured), and his marked avoidance of any mention of the Panel-led Inquiry which had been called for in the Grenfell Speaks petition, and repeatedly on the previous day, by counsel representing many of the core participants from the Grenfell Community.

At that moment Michael Mansfield QC, with the full support of the legal teams representing the Grenfell Community, briefly and concisely challenged the clear and obvious avoidance by Sir Martin of any mention of the call for a panel-led inquiry. By way of reply Sir Moore-Bick stated emphatically that this was a decision for the Prime Minister and was beyond his authority to decide.

The petition calls on the Prime Miniister to exercise her powers under the Inquiries Act to appoint additional panel members, with decision making powers, to sit alongside the Chair of the Inquiry, to ensure those affected have confidence in and are willing to fully participate in the Inquiry. The petition has now accumulated 24,457 signatures. It continues to grow at a steady rate of hundreds each day and shows no sign of stalling.

Despite this the Prime Minister wrote to the Chair, Judge Moore-Bick, on 21st December, immediately before the extended Christmas break, pouring cold water on the hopes of the petitioners and leaving their legal teams with insufficient time to mount an appeal against her decision. The key passage from the PM’s letter is reproduced below:

The Prime Minister’s statement seems, at first glance, a clear and unambiguous dismissal of the calls for a panel-led inquiry and, like many others, my immediate reaction to it was one of deep frustration and disappointment, accompanied by a strong  sense of betrayal and anger. However, on closer inspection it was apparent that what seemed to be a clear and unambiguous statement was immediately followed by a slightly more ambiguous follow-up:

The ambiguity, for what it’s worth, lies in just those last three words where the Prime Minister concedes that “additional members should not be appointed …. at this stage.” This seems to offer a glimmer of hope that she might be considering additional panel members at the second stage of the Inquiry – but her statement remains uncomfortably unclear and ambiguous and we cannot assume that this ambiguity is unintentional.

We know that the the Inquiry will be structured in two phases and that there is considerable urgency attached to the early production, in stage one, of an interim report on the immediate causes of the fire. The reasons for this urgency need no explanation.

However, one still has to wonder why the PM couldn’t find it in her heart to include a clear and explicit commitment to a panel-led inquiry at the second stage, for the benefit and peace of mind of the severely impacted community of survivors and bereaved who have made it very clear, both to Sir Martin and to the Prime Minister, that they are deeply concerned and very determined about this.

In his written response to the submissions made on 11th and 12th December Sir Martin Moore-Bick stated;

“It is clear that many of those who lived in Grenfell Tower and the surrounding area are strongly of the view that in the years preceding the fire the TMO received many complaints about the condition of the building and (among other things) warnings about matters affecting safety, including the risk of fire, to which little heed was paid. Investigation of those complaints and the responses to them will form an important part of the Inquiry’s work and it is necessary to examine carefully whether they were handled by RBKC and the TMO properly and in accordance with good practice.”

Important as these issues are, we know that there are other equally important issues to be considered. It is vital that the Inquiry considers whether the failings of these organisatons may have been caused by an excessively patronising or even contemptuous attitude toward their clients, and whether this may have led, in some cases, to incidents of criminal negligence, and even to a widespread culture of criminal negligence.

What’s more, we must also consider whether a similarly patronising and contemptuous attitude may have influenced the Prime Minister’s dismissal of the petition and the appallingly insensitive timing of her decision. No other explanation even comes close to explaining the timing of the PM’s decision to publish her letter on the very eve of Christmas. It is simply not credible to view this as an error of judgement and it has all the hallmarks of a deliberate and cruel snub. There is an expression that is sometimes used in medical circles to describe a massive heart attack. It is called ‘a gross insult to the heart’.

This was a gross insult to the heart. The Grenfell Community has suffered greatly and cntinues to suffer and there can be no justification for such cruel and insensitive treatment from the Prime Minister.

In my view we must be prepared to consider the possibility that her atrocious behaviour on this occasion may be exactly what we feared – a blatant attempt to destroy the confidence of the Grenfell Community and discourage our participation in the Inquiry.

We must not forget that the Government itself is deeply implicated in the Grenfell tragedy through its deregulation policies, its overt support for the ‘regeneration’ and gentrification of the social housing sector, and its failure, over many years, to reform the building regulations which it knew to be unfit for purpose.

However, we must not lose heart and must continue to trust and to work with the legal teams that represent us, regardless of the actions of those who would seek to limit the scope, effectiveness and independence of the Inquiry.

Finally, please watch for our next blog (coming very soon) on the interim report submitted to the Inquiry by Dame Judith Hackitt on her Independent Review of Building Regulations and Fire Safety. This was commissioned, following the Grenfell fire, by the Secretary of State for Communities and Local Government.

AND KEEP SIGNING THE PETITION!