Posted on February 8, 2018 by grenfellactiongroup 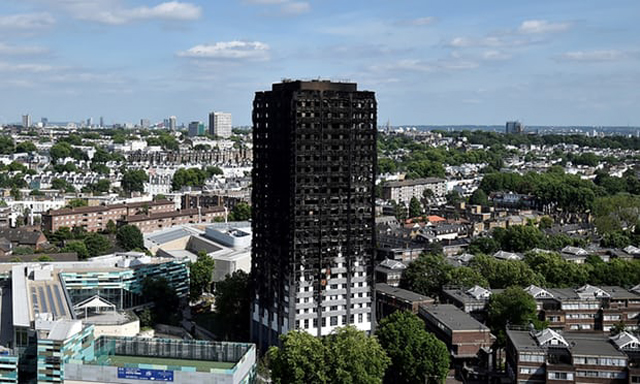 Residents of the homes surrounding Grenfell Tower have been told they must pay rent, despite more than a fifth of them still living in hotels due to ongoing maintenance problems.

Hundreds of flats on the Lancaster West Estate that overlook the site of the tragedy were left without basic amenities after June’s fire destroyed centralised gas and water lines under the building.

Urgent repair work was undertaken on the Hurstway, Testerton, Barandon and Grenfell Walkways, but some residents have complained that they are living with intermittent hot water and central heating, eight months on from the fire that killed 71 people

At least 66 households have not moved back to the estate, while 248 residents are currently occupying flats.

Royal Borough of Kensington and Chelsea (RBKC) officials said they recognised there had been “disruption to services” and outlined a “compensation” scheme for residents until April 2018.

The council noted problems with intercom systems, gas supplies and interruptions to heating and hot water.

An Executive Decision Report from the council also noted additional fire safety works had not yet been completed on the block and access to the estate remained limited.

“While residents are experiencing these levels of disruption, it is unreasonable to expect them to pay the full amount of rent and service charges without compensation of some kind,” it stated.

But Lancaster West Estate resident Joe Delaney, who is still living in a hotel eight months on from the fire, said the charges were not justified.

“RBKC are yet again demonstrating how out of touch they are,” he told The Independent.
In Pictures: Grenfell Tower after the fire

“People are still either living in a crime scene or stuck in hotels, yet RBKC believe that they can resume charges for services that residents are not benefiting from in buildings that are still unsafe and unfit for purpose.

“Perhaps if the heating, hot water and gas were working and, almost eight months since the Grenfell disaster, RBKC could prove to residents that the buildings were safe then some charge could be justified but the situation is the same today as it was the day after the fire.

“The tower hasn’t even been covered so people not only live in the shadow of a crime scene, they are also forced to view the charred remnants of a building in which their friends, family and neighbours horribly perished.”

Samia Badani, leader of Bramley House residents’ association, said a 15 per cent reduction did not reflect the ongoing “trauma” suffered by residents.

“It is clear we are not asking for rent to be withheld because of disrepair – the trauma we suffer compounded by the failure to be evacuated is not reflected in this 15 per cent,” she said. “We are asking for a gesture because we don’t have peaceful enjoyment of our homes.”

But deputy council leader Kim Taylor Smith said: “Following consultation, the 248 households living in their homes on the Lancaster West Estate will continue to receive compensation of up to 50 per cent on their rent and service charges in recognition of the disruption to some services.”

He added: “The reintroduction of rent and service charges for residents on the estate comes as the promised seven-month charge-free period comes to an end. Meanwhile, plans for a multimillion pound refurbishment plan, that is being decided by residents, is well underway.”

It comes after the organisation in charge of Grenfell Tower and its surrounding walkways was forced to hand back control of around 9,000 homes to RBKC after it admitted that it could “no longer guarantee that it can fulfil its obligations”.

Kensington and Chelsea Tenant Management Organisation was stripped of its contract to maintain social housing following a vote of no confidence from all 25 residents’ associations earlier this year.