Posted on May 8, 2014 by grenfellactiongroup 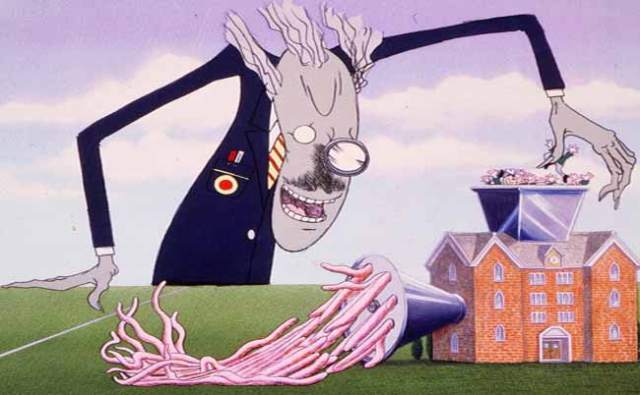 Good morning, Worm Your Honor,
The crown will plainly show
the prisoners who stand before you now
were caught red-handed showing feelings,
showing feelings of an almost human nature.
This will not do.
(Pink Floyd – The Wall)

Every once in a while we are reminded of the need to lighten the tone a little and introduce a little humour. With that in mind, we thought we might like to enlighten our readers about a comical but insightful incident that occurred at the RBKC Town Hall back in 2012.

A small group of activists from the Grenfell Action Group descended on Hornton Street to observe a full Council meeting and to listen to what Tory and Labour Councillors had to say about the KALC project which, by that time, was already an unstoppable juggernaut.

We could scarcely believe what was happening when Derek Myers, the then Chief Executive of the Council, took one look at these unwelcome visitors from Lancaster West, sitting in the Public Gallery, and immediately summoned the assistance of the the local rozzers.

Five minutes later, a Police Sergant and two constables appeared on the scene and seemed genuinely bemused at the reason for their call-out. The truth was that they had been troubled by nothing more threatening than six or seven people, all over 50 and some disabled, simply excercising their democratic rights. The Police Officers hung around for five or ten minutes and then made a sheepish and apologetic exit.

The irony of this story is that, behind the scenes, the Police had far more serious matters to occupy them. They had arrested a ‘former’ Conservative Councillor, who had also been serving as governor of a North Kensington nursery school. This miscreant had long been known in the most senior council circles (ever since he had first been arrested in 2010) to be the subject of a serious police investigation, but had only resigned his seat when formally charged with child pornography offences. He was subsequently convicted of those charges and is now a shamed ex-Royal Borough Tory Councillor.

At his trial his defence urged the judge to spare him from prison, suggesting that he was;

“…perhaps a bit naïve, unworldly, but essentially a nice, amiable man, of impeccable character, who had Labour and Conservative politicians queueing up to attest to his integrity.”

The judge, of course, was more than happy to oblige.

What are we, or our readers, to make of such odious and murky double standards at the heart of Royal Borough politics, and what does this story reveal about the attitudes of the privileged few who exercise so much power in our names?