Posted on February 15, 2017 by grenfellactiongroup 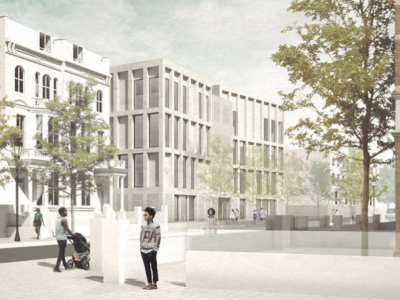 Ugly is as ugly does!

The Grenfell Action Group have always taken the time to lodge our objections to local Planning Applications that we believe will have a negative impact on the local community. Time is running out for submissions to oppose the Council’s plans to demolish the Youth Centre in Lancaster Road and use the vacant site to consruct a new municipal centre.

The proposed new building will then be used to house a new North Kensington Library the existing listed building having been leased to the Notting Hill Prep School Ltd in a private business deal. The new building will also re-house the existing Youth Centre on the second floor while the top two floors will, we believe, be leased to private education providers, most likely Chepstow House. It is the opinion of the Grenfell Action Group that it is  immoral of the RBKC to use tax payers money to refurbish this building, not for community use, but only for the children of the economically privileged.

We are urging our readers to take just a few minutes to write to the Council using the link below and to register your objections to this unjust plan. We understand that the closing date for submissions is offically Friday 17th Febuary but that RBKC will continue to accept residents views up until towards the end of the month.

Below is the Grenfell Action Group’s objection to the Council’s plans:

“We are writing to you on behalf of the Grenfell Action Group to object in the strongest terms possible to the planning application regarding the proposed new North Kensington Library building in Lancaster Road, W11.

The Grenfell Action Group believe that the proposed development will have a serious adverse effect on the residential amenity of neighbours to the site and the local community in general. We believe that the adverse effect on the residential amenity will impact through increased noise, disturbance, loss of privacy, overshadowing of neighbouring buildings, environmental and traffic management concerns.

The Grenfell Action Group believe that this particular area of Lancaster Road is already severely overdeveloped and has a very high density of people. This is due, in part, to the location of two private schools whose users clog up the surrounding area every morning and evening when picking up or dropping off their children at school in large 4 wheel drive cars. The parents of school users also frequently park their cars on yellow lines (with seeming impunity) and we believe that the proposed additional use of the top two floors of the new library building for educational use will only increase this problem. The Notting Hill Prep School also use yellow lines to park their coaches that frequently take pupils to and from external activities and already cause serious danger for other road users and pedestrians alike. The Notting Hill Prep School already employ a steward to marshal their pupils from one side of Lancaster Road to the other and we believe that this places the children at serious risk and any further increase in traffic will only increase the danger to these infants.This arrangement is already an accident waiting to happen!

The Grenfell Action Group believe that there is already a massive loss of open space in North Kensington and we strongly oppose the loss of the old Issac Newton School playground space on the site. We raise serious concerns about the health impact on the users of the proposed multi use games area (MUGA) that the architects are proposing to locate on the roof of the new library building and we draw attention to the nearby location of the heavily polluted Westway arterial highway. The Grenfell Action Group believe that children have a right to play at ground level and not to be forced to spend their leisure time hidden away on a rooftop MUGA next to a polluted motorway!

Having seen the plans for the new library building we believe that the architecture and style of the building is not in keeping with the local area. The proposed building is very ugly, has no architectural merit and could have been better designed by a 6th Form student. We object to the fact that the building is all square and pays no respect to the style and grace shown in surrounding buildings. We were told that the new library would be “better” that the existing North Kensington Library but this is definitely not the case in terms of architectural design. We believe that the design of the new library building will have a detrimental visual impact on the surrounding area and that the there will be a strong negative impact as a result of the development on the character and aesthetics of the local neighbourhood.

The Grenfell Action Group have examined the architects plans for the new building and we believe that the proposed development is over-bearing, out-of-scale and out of character in terms of it’s appearance compared with other existing developments in the vicinity. We believe that the Planning Committee should consider very carefully the loss of existing views from neighbouring properties that would adversely affect the residential amenity of neighbouring owners. We do not believe that the architects or the RBKC have taken this matter into calculation.

The proposed library is close to a much loved Listed Building (namely the existing North Kensington library) and the Grenfell Action Group believe that the new construction lacks style and grace and will have an adverse impact on the setting of the Listed Building.

The Grenfell Action Group believe that the plan to knock down the existing youth centre and re-locate the service into the new building places the future of the youth service at serious risk and that this has not been considered by the RBKC or the Planning Dept. The rental value for the current youth centre building is set at a peppercorn rate but this will be set to increase dramatically when the service relocates to the new building. Who will be responsible for meeting the increase in rent and will the Council guarantee that they will finance these additional costs and ensure that the youth centre has a long term future in the new library building?

We believe that the existing Children’s Library set in the basement of the current building is part of the culture and heritage of North Kensington. The new library has no separate location for a Children’s Library and it’s users will be forced to mix with the general library population. We believe that this is greatly detrimental to the experience currently enjoyed for young library users and that the Planning Committee should ensure that a separate Children’s library space is provided within the new proposals. Without such a space we request that the Planning Committee refuse the application.

In conclusion, the Grenfell Action Group wish the Planning Committee to consider all the points that we have raised above and take on board our serious objection to the proposed new North Kensington Library building and turn down the application”.