Posted on July 3, 2015 by grenfellactiongroup 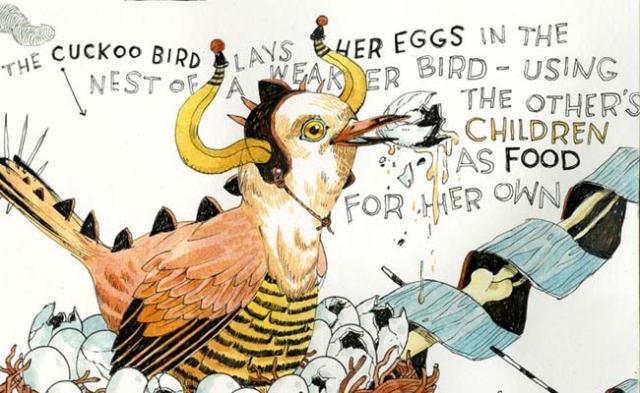 A copy of the open letter below came into our possession recently and, although it was not addressed to the Grenfell Action Group, we have decided to share it with the residents of Lancaster West Estate and with other North Kensington Council estates facing the threat of ‘regeneration’. Whether or not you have received an invitation to this event, if you live in social housing in RBKC we would encourage you to attend this important debate on the future of social housing and the Council’s plans for the ‘regeneration’ of North Kensington. 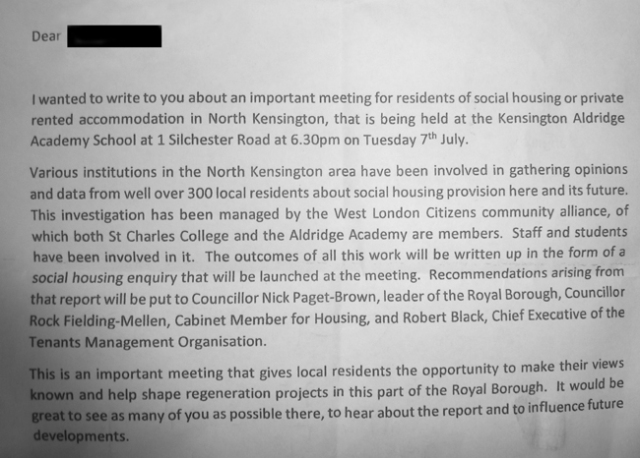 The event is being held in collaboration with an organisation called West London Citizens who describe themselves as;

“…a broad-based alliance of member communities who work together for the common good through the development of people and communities so they have the power to make change on the issues that matter”.

We find it deeply ironic, and more than a little worrying, that the Council has chosen to parachute in this organisation, which few local people know anything about, and most have never even heard of, to investigate, report on, and make recommendations on the future of our homes, rather than raise these issues in a more transparent inclusive and direct manner with the residents of the estates which are under threat.

West London Citizens is a branch of a national organisation called Citizens UK and there are indications that this parent body may be funded directly by Central Government under David Cameron’s ‘Big Society’ initiative. The West London branch is led by Stefan Baskerville, an Oxford graduate and former president of the Oxford University Students Union.

We fear that West London Citizens may be colluding with the Rotten Borough and may produce a dubious report and dubious recommendations which RBKC will use to hoodwink residents about the true intentions of this greedy and heartless Council that will not be satisfied until every social housing tenant is ruthlessly expelled from RBKC and the land we currently live on is simply taken from us and given over to spiv property developers.

We would advise our readers to beware of West London Citizens which has chosen to feed at the RBKC table and appears to have entered into partnership with a brutal Council that does not have the interests, nor the empowerment, of existing social housing tenants at heart. We fear that the outcome of all of this will be that West London Citizens will produce a report that will be used by RBKC to justify a programme of ‘social engineering’ via the creation of so called ‘mixed communities’, the core of which will be the creation of yet more privately owned housing through the destruction of existing social housing communities.

No doubt the usual suspects, including Cllr Feilding-Mellen and Robert Black from the TMO, will be there to tell us how good it will be for us to have our homes destroyed in the name of ‘regeneration’, and to have our lives, living rooms and communities turned upside down so that more “buy to leave” flats can be put on the market for huge profit.

There is little doubt that the true intention of the Council is to change the status-quo so that only the super rich can afford to live in RBKC and we, the underclass, face the prospect of being ‘socially cleansed’ from the Rotten Borough and forced to relocate to Manchester, Peterborough or Luton. By the way, should you survive the regeneration of your area and succeed in being rehoused locally then you are likely to find yourself in cramped sub-standard accommodation, with greatly reduced residential amenity, a less favourable tenancy agreement and the prospect of being forced to use a ‘poor door’ to enter your property.

Cllr Feilding Mellen has been in power at RBKC for just a short time and we believe he was appointed specifically to sweep away families and communities that have lived and worked in RBKC for generations. There is no doubt that our housing and our communities are under attack from a vicious neo-con element in RBKC that despises the underclass and will not rest until they have taken every blade of grass from us and destroyed every working class housing estate in North Kensington. We need to let the Council know that we treasure our homes and that our communities are precious to us and will be defended.

The remaining question, of course, is how a supposed grass roots organisation like West London Citizens, that claims to stand up for oppressed communities, appears to be working in partnership with a far-right Tory Council that aims to smash working class communities and destroy the lives and homes of existing social housing residents forever. We would expect West London Citizens to explain their role and fully address and answer our criticisms at the meeting at the Kensington Aldridge Academy on 7th July!