Posted on August 6, 2015 by grenfellactiongroup 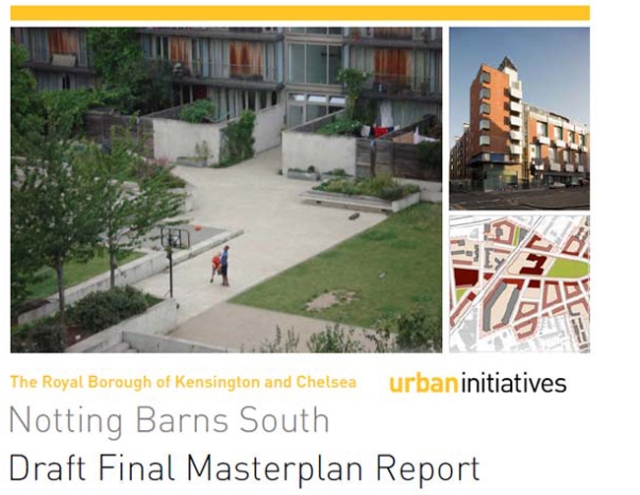 It hasn’t escaped our notice that there’s been a great deal of interest in our recent blog entitled ‘Notting Dale Is Latest RBKC Regeneration Target’, and a lot of interest also in the ‘Latimer Masterplan’ to which we referred in that piece.

Having heard rumours in 2009 of the existence of a regeneration ‘masterplan’ for the Latimer area, we searched the council website and discovered an internal RBKC report which confirmed the existence of this document. The report we stumbled on, entitled ‘Masterplan and Feasibility Study – Latimer’ was addressed from the Director for Property to a Cabinet Working Group, and contained ‘the conclusions of a masterplanning study, undertaken by Urban Initiatives, for the Latimer (Notting Barns – South) area’.

According to the report the objectives of the masterplanning study were to contribute to the wider regeneration of North Kensington and create sustainable, strong communities by:

Amazed by what we had discovered we requested a copy of the ‘Latimer Masterplan’ from the Council under Freedom of Information legislation. They refused our request. We then complained to the Office of the Information Commissioner, who found in our favour, and under pressure from the ICO, the Council eventually relented and published the masterplan.

It is important to remember that although this ‘masterplan’ was produced six years ago in 2009, it bears a striking resemblance in its’ detail to both the Kensington Academy and Leisure Centre development, which is now more or less complete, and to the ‘study’ most recently announced of options for the ‘regeneration’ of a large area of Notting Dale, loosely referred to by the Council as the Latimer/Silchester area. Despite Council claims in 2009 that they had no intention of implementing the recommendations of the ‘Latimer Masterplan’, it would now appear, and we have never doubted, that they have every intention of implementing a version of this masterplan which will be very close to the scope and detail of the original.

Given the high current level of interest in this document, the massive scale of regeneration it proposed, and its’ obvious relevance to the latest Latimer study recently announced by the Council, we thought it might be a good idea to make the original ‘Latimer Masterplan’ available again to any of our readers who might wish to study the full document :