O’HAGAN AND HIS IVORY TOWER

Posted on June 5, 2018 by grenfellactiongroup 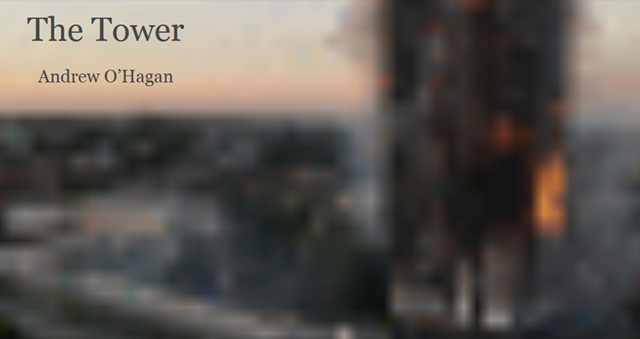 There have been rumblings of disquiet and discontent recently among those affected by the Grenfell fire disaster concerning a lengthy essay, ‘The Tower’, published in the London Review of Books by Andrew O’Hagan, one of the glitterati of the UK literary scene. Melanie Coles, a local woman who consented to be interviewed for O’Hagan’s essay was appalled when the essay was published to see how her input, and that of others, was misrepresented, and how inaccurate much of the essay was, so she complained to the London Review of Books. She has now given her consent to have her letter of complaint reproduced as a blog by the Grenfell Action Group. Read On!

I wish to complain about the article ”The Tower” and the author (Andrew O’Hagan), published in the London Review of Books for a number of reasons, based on the IPSO Editors Code of Practice, regarding the content of the article itself; a (video) image that was used without consent sought for it to be used in this way; about the information given by the author regarding their intentions for this piece, and the author’s failure to be sensitive when dealing with a case involving grief or shock.

The article in question is littered with inaccuracies, including even spelling mistakes of people’s names, although these pale in comparison to the level of inaccuracy in recounting events. I hope that others will respond with their complaints, as I cannot comment on their behalf. I shall only be commenting here on my own small contribution to the article and my own feelings regarding this.

I live in the community local to Grenfell Tower, and personally knew a number of people who died in the fire. I am a teacher, and some of them were children I taught. We are a community saturated with grief and trauma, many of us nowhere near something that could be seen as recovery. Andrew O’Hagan’s article contains much that could be seen as damaging to the credibility of our community, at a time it is essential our voices are heard, through the public enquiry which has just started. The content is also highly distressing reading for people who are directly affected, and for some of them offensive, due to the inaccuracies it contains.

I was approached by a researcher on Andrew O’Hagan’s behalf, around October 2017, who talked to me about the intentions of the author with regards to a book he was writing. I agreed to an interview, which was recorded with my understanding that this was for the purpose of transcripts only. I also met with Mr O’Hagan, who gave me various assurances, the most important being that the book was going to be about the lives of the people who died in the Tower, not about their deaths. It was to be a sensitive and respectful tribute, exploring what life was like in the Tower and the local area prior to the fire. I was told that there might be some commentary on the background of social injustice in the area, and problems with housing. I was assured that the author and his team were attempting to contact families and friends of people who lived and died in the tower, and that people were not being unnecessarily pressured, but that the author wanted to ensure that everyone who might want to contribute had been offered the opportunity. I was told that if people did not want to contribute their wishes would be respected. I was assured that truth and accuracy were of the utmost priority. I felt reassured by the fact that at least two people who live locally were on the author’s team.

I was sent a message by the author, via a text message from one of his researchers. This included references to some of his earlier works, and reviews, ending with these words:

“My Wikipedia entry, though not written by me, is pretty accurate in summing up my attempt to get at the truth of British society. My career has given me a megaphone, and I want to make sure I can speak into it of the right subjects and that I channel the true voices. The right wing press hate me and I can’t sell myself any better than that. I know it must be odd to meet a stranger, a well-known writer, to turn up and say he wants to get it all down right. But I do and I will. And I’m asking the community to help me as only they can, to defy years of prejudice and censorship and corruption in local and national government, and let me tell the truth of Grenfell going back years.”

I was also assured verbally that before the book came out, relatives of the deceased who had contributed would be approached to ensure they were happy with the content. I have no idea if this has happened in the case of this article, and I did not know there would be a preceding article in the London Review of Books.

I think it is important to note that I was not consulted by the researchers or author on my own experience of being a resident of Kensington and Chelsea all my life, or my experiences or opinions with regards to the local council. Yet I see the author spent a significant amount of time with Rock Feilding-Mellen’s family and other council figures. If the researchers were collecting information from bereaved local people only with regards to the lives of the people lost, and not asking them directly about their experiences of the council, then speaking in detail with figures in local government, then the account cannot be a balanced perspective, as the information on the issues of local government have only been explored on one side. And that is the side the author appears to strongly favour.

Towards the end of the first chapter of the article (I only have access to the online version so cannot give page numbers) there is a video of me speaking, with the caption “Melanie Coles describes Fethia Hassan’s last day.” I did not give my consent for the video to be posted publicly. I was assured that the purpose of recording me was solely for the purpose of making transcripts, so that the interviewer did not have to make notes as we spoke. The act of posting this video is dishonest. I feel I was not just misled, but lied to. I do not want this video of me posted online so publicly, and I want it removed immediately.

In a section of the text in the article, in the first chapter, the day before the fire started is described. There is a reference to Fethia’s teacher (myself) recounting a memory of that day and Fethia being upset about losing a white flower from her shoe. Apart from this being a simplistic summary of my account, the article states: “It would be there the next day. ‘Fethia gets herself all churned up about such things, but it will all be fine’, her teacher said to herself as she closed her classroom for the day and made her way home.”
I do not know how much poetic licence is “allowed” in an account like this, but to me, if you put something in quotation marks, this implies that is what the person actually said, or at least said that they thought (as I apparently said this to myself). I did not say “Fethia gets herself all churned up about such things”, nor did I say that I thought it. I do not think I have ever used the term “churned up” about anything. It seems like a minor thing, but if a small detail like this is fictionalised, how can we the readers (especially the wider public) feel sure that other, more significant apparent quotes by the people referred to, are not also fictionalised. And many of these quotes may be far from trivial details (there is a criminal investigation and public enquiry going on). This author is being irresponsible. Also, the effect created when quotes are used (I think) gives a powerful impression of having an insight into that persons character. So it needs to be accurate.

In addition, a little earlier in the article it is stated “…Rania at the Maxilla Children’s Centre, a nursery their children attended. Melanie Coles, one of the workers there, remembers…” This is another inaccuracy. Maxilla Children’s Centre, which I did work at, closed years ago. Fethia never attended there. She attended Golborne and Maxilla Children’s Centre, where I taught her at the time of her death. This may seem unimportant, but someone aware of local history, background and politics should be very aware of the significance of the difference between Maxilla, and Golborne and Maxilla. Either research has not been thorough enough, or the author has been careless, because any local resident would immediately notice and recognise the significance of this flaw.

Is this piece of writing to be perceived as fictional or factual? Of course it must be factual, these are real events, and highly sensitive ones, emotions are still raw, people are still traumatised, this has had a massive impact on our lives. I think that the fictionalisation of words, and events, is highly morally questionable, especially given the timing of the piece. If a small detail is questionable, what else in here can be relied upon? And yet the whole article works towards giving itself an air of credibility which it cannot deserve.

Mr O’Hagan has reached various conclusions, interpretations based on his “research”, which I feel are presented as factual when they are opinions. I personally do not agree with his conclusions. Everyone is entitled to their opinion, but it must be presented as opinion, not as authoritative when it is not. I originally consented to my words being used by Andrew O’Hagan based on a very different premise, he stated his intentions to me and he has clearly been dishonest. I want my contribution to his work withdrawn, and I want the video of me taken offline. I do not want my name associated with his work, now or in future, unless this is in relation to my objection to it.

I would like an apology from the author, for myself and more importantly for the Grenfell community, and a statement from him explaining his actions to the people who feel he has let them down.

I would be happy for any of my comments here to be published, although I would require my consent being sought beforehand, with the assurance that my comments will not be presented out of context.

An attempt was made by Ms Coles to lodge the above complaint with the Independent Press Standards Association (IPSO) but the London Review of books appears not to be registered on their website. She has emailed IPSO to query this and has sent her complaint directly to the London Review of Books, of which Mr O’Hagan is an ‘editor at large’.

“Sympathy for the Council: Some comments on Andrew O’Hagan’s Grenfell Tower article”
https://libcom.org/blog/sympathy-council-some-comments-andrew-ohagans-grenfell-tower-article-04062018

This entry was posted in Uncategorized and tagged "The Tower", Andrew O'Hagan, London Book Review, O'Hagan under fire over Grenfell essay. Bookmark the permalink.
%d bloggers like this: